The Friends of Old Rochester Swimming held a car wash on Saturday, July 28, at the Mattapoisett Fire Department to raise more money for the up-coming winter sports season.  The newly formed ORR swim team needs to raise $7,500 by the fall to secure their place for the winter.

FORS is a brand new group, as well.  The members began the process of forming back in January, according to group president, Kristin Johnson, of Marion.

“We ended up talking to everyone from the athletic director to the principal.  It came together rather quickly,” Johnson said.  The school committee voted in June to approve the formation of the group as a fundraising entity for the team.

The last car wash they held raised about $800, according to Johnson, who said that the team cannot hire a coach or officially choose a pool until they raise $7,500 by October 1.

“We’re looking for corporate donations from around the Tri-Town, as well as from the community,” she said.

While the Friends of Old Rochester Swimming raise money for the team, the school has been investigating a handful of area pools that ORR may be able to use, including UMass, Dartmouth, the Wareham YMCA, and New Bedford High School.

Inspiration for the formation of a swim team at ORR came from a variety of sources.  The only high school swim team in the area is Bishop Stang in Dartmouth.  As a result, are many young students in the Tri-Town who swim competitively for municipal teams.

Colleen Beatriz of Mattapoisett is one of those students.  She has been swimming with the Wareham Riptides for seven years.

“Right now I’m also swimming for the Cape Cod Swim Club,” she said.  Beatriz will be in ninth grade at ORR in the fall, and she is motivated by the benefits of the sport.

“It’s great exercise and it makes you feel really healthy.  With the hard work you put in, going to a meet and competing; it feels good,” she said.

Beatriz hopes that having a swimming team at ORR will raise the profile of swimming in the eyes of the community, as well.

“I’m hoping that once it starts, people can see how fun it can be.  I really think it could be one of the biggest sports in the area if people gave it a chance,” she said.

Johnson, a former swimmer, sees the potential for building a strong school community beyond the component of competition.  One of the enduring aspects of her experience as a swimmer was forging relationships that have lasted through the years.

“You meet a lot of people when you swim.  I made friends from swimming who I still talk to today.  It’s a real bond,” she said.

For more information on Friends of Old Rochester Swimming, visit their Facebook webpage at https://www.facebook.com/FriendsOfOldRochesterSwimmingFors. 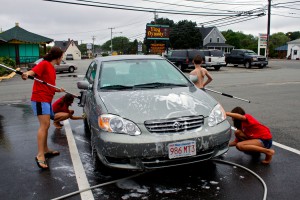