You are here: Home » Features » New Bedford: The City of Light

In 1851, an English noblewoman wrote home to say, “I have been invited to visit New Bedford … it is said to be the ‘City of Palaces,’ from the beautiful buildings it contains.” New Bedford was once the jewel of Massachusetts, called by some the “City of Light.” It is this glimmering history that author Peggi Medeiros has explored in her newest book, New Bedford Mansions.

Medeiros, a research librarian and historic preservation expert, arrived at the Mattapoisett Free Library on a brisk, chilly Saturday, October 24, to discuss her latest book. She has written a book that details a New Bedford, which to many seems to be veiled firmly in the mists of the past.

“The brightest age of New Bedford,” said Medeiros, “begins at the end of the American Revolution, when the Rotch family moved to New Bedford from Nantucket, and ends at the onset of the Civil War.”

It was in this era, Medeiros said, that New Bedford became the whaling capital of the world and the wealthiest city per capita in the United States. She said proudly, “I wanted to write the biography of that New Bedford.”

During New Bedford’s reign as the City of Palaces, world-renowned politicians, painters, naturalists, and architects flocked to its shores. Frederick Douglass began his life as a free man in New Bedford. Bronson Alcott (the father of Louisa May) lectured in the city routinely. Harriet Tubman sought and received shelter in New Bedford to avoid fallout from the raid on Harper’s Ferry in West Virginia. John Quincy Adams visited the city as a young man; so did Ralph Waldo Emerson and Henry David Thoreau. Ironically, Moby Dick author Herman Melville only spent about two weeks in the city.

John James Audubon used the whaling merchants as a patron bank; Medeiros described how he would “go from house to house of the different whaling merchants, selling them first editions of Birds of America.” One such edition, reputedly the seventh ever published, remains at the New Bedford Public Library. The book was bought by wealthy whaling merchant James Arnold and was donated to the library by his descendants.

These numerous luminaries were drawn to New Bedford through their friends, the whaling merchants of New Bedford. The people who lived in this glittering city inside great mansions bordering the deep blue Atlantic would define New Bedford in the years to come.

James Arnold and his wife Sarah, the buyers of the seventh Birds of America, were staunch abolitionists and also the aforementioned protectors of Harriet Tubman. The two were the benefactors of the famous Arnold Arboretum in Jamaica Plain, and they also built a beautiful mansion at 427 County Street.

“The old mansion is still easily visible,” said Medeiros. “Just look at the central brick building. What we have is a wonderful, original Federal Revival mansion, flanked by two Colonial Revival wings.” The building described is now known as the Wamsutta Club.

Modern New Bedford, however, possibly owes most to a strong and willful young bride. Rachel Smith Howland arrived in New Bedford in 1842, the new wife of Matthew Howland. Howland’s family was one of the richest whaling families in the country; Matthew himself kept the books of the family company. Rachel, to this day, manages to knock the socks off of everyone who learns about her. When she was not praying with Abraham Lincoln or serving on a school board for black children with Harriett Beecher Stowe, she was organizing useful public works for the city. She was active in the New Bedford school system, which Medeiros notes was “not any easier” in the 1860s as it is today.

“She did a remarkable thing. When the school board in one instance disagreed, she threw a party,” said Medeiros. “She invited the school board to the party and was able to make them all talk. What an accomplishment that was!”

In 1866, Howland organized the Association for the Relief of Aged Women of New Bedford. This charitable organization was meant to feed, clothe and care for elderly women in the city who had no family. The organization still exists to this day. So does Hazelwood Park – the rolling green space sits on the former grounds of Howland’s summer cottage.

It is often very difficult to imagine what New Bedford must have been like in these golden years. So much of its cultural history lies dormant, even when reminders of a glorious past loom directly before you. The mansion of Joseph Grinnell, a four-term Massachusetts senator, was for many years the library of the Swain School of Design.

Rachel Howland’s summer cottage still stands in Hazelwood Park, resting in what Medeiros terms “demolition by neglect.” Its windows are boarded up. Sections of roof cave in and green vines climb steadily up the fence that walls it off from the park. Here, the buildings that remain are often so removed from their history that the history is lost entirely.

Traces of the shining city history remain, observed by the sharp eyes of researchers like Peggi Medeiros. That day, Medeiros’ eyes shone as she recounted the grand buildings, famous visitors, and strong minds of old New Bedford.

For a moment, as Medeiros spoke, it was as if Rachel Howland herself was standing there behind us all: The mists part and I can see the great ships, the brick mansions and crowds of people. The history of the city often seems so far away, separated by a curtain over 100 years thick. Now though, I can feel their presence in the history that remains. 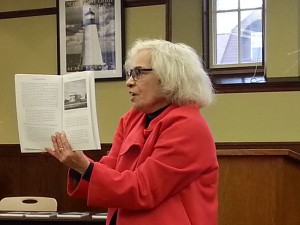