You are here: Home » Features » Memorial Cruise Has Record Turnout

With a full moon and a high tide, more than 100 people enjoyed a two-hour cruise out of New Bedford on the 85-foot MV Cuttyhunk for the annual Charles A.R. Pickles Memorial Cruise on Saturday.

The event’s proceeds fund scholarships for Community Boating of New Bedford, which offers scholarships to children who want to learn how to sail. The event also donates to the Beverly Yacht Club’s junior sailing program. Charles A.R. Pickles was a sailing instructor at the yacht club for many years.

“This event brings so many people together in Charles’ memory,”  Diane Bondi-Pickles said. Charles lost his life suddenly in 2006 in a skateboarding accident.

“We host this cruise to celebrate the things that were most important to Charles, which were family, friends, good food and being on the water,” Bondi-Pickles said. “We don’t do a silent auction or sell T-shirts … this is just about enjoying the company of good people in a beautiful setting.”

Pickles was the son of Marion Town Clerk Ray Pickles, and many of the attendees work at the Marion Town House. Some joked about how the town would be ‘up the creek’ if the ship went down.

Attendees included friends, classmates, relatives and neighbors of Charles and some who never knew him.

“We saw the [event] in The Wanderer and thought it would be a great experience, and it is,” said Judy Selwyh of Mattapoisett, who came with her husband, Lee.

“Believe it or not, every year we’ve had a beautiful evening,” said Bondi-Pickles, who claimed that it was Charles who saw to the weather. 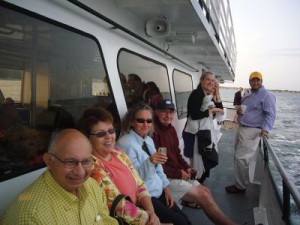