You are here: Home » Features » Mattapoisett Native to Compete in National Pageant

You’ve seen them on TV looking glamorous and fabulous. Pageant queens come few and far between as it takes a rare type of woman to be able to master beauty, brains and talent. 23-year-old Kaelyn Serra of Mattapoisett has proven she has what it takes to master all three. Just three weeks ago, she was named Miss Massachusetts United States defeating 14 other ladies for the title.

“Winning this title means I will get to be a role model to many young girls,” said Serra.  “I will be attending charity events, meeting new people, traveling and experiencing great opportunities. I’m happy to have won the title and wish to make the best of my year of reign.”

Serra, a 2007 graduate of Old Rochester Regional High School, is no stranger to being in the spotlight. She heard about pageants through her fellow models – a career she has been pursuing for a few years.

“They would always tell me about upcoming pageants that they were going to be taking part in or that they have done in the past and I would sign up,” said Serra. “I have always had fun competing and meeting new girls from all around the world.”

Kaelyn won her most recent title on April 1 in Portland, Maine at the Miss Massachusetts United States state pageant. The crowning moment was well deserved because it takes months of preparation before setting foot on stage.

Serra says having the right makeup, nails, hair, interview outfit, evening gown, bathing suit, body, shoes and attitude are just some of the elements that make a good pageant queen.

“It has to be something you enjoy because it can get stressful,” said Serra. “It takes preparation, like anything in life, but if you enjoy it, it makes it all worth while. I wouldn’t give it up for the world.”

Serra cites her favorite reasons for competing in pageants as meeting new people and having a great time. Even the daunting task of waiting for results on stage is something she enjoys.

“It’s exciting and scary all at once, kind of like an adrenaline rush!” she said.

She will have a chance to relive that adrenaline rush on a national stage when she travel to Washington D.C. to compete in the Miss United States national pageant in July. While the stage will be larger, Serra isn’t worried because she’s got a wonderful support system – her family.

“They are a huge part of my life and success,” she said. “I don’t know where I would be without them.”

And although she’s taking her talents to the next level on a national stage, she never forgets where she comes from.

“Mattapoisett is where I grew up and my family is here,” she said. “I think it’s a beautiful town where I have made a lot of great memories.”

Whatever the future holds for Serra, she has an open mind for anything that comes her way.

“My goals for competing in pageants and for life after pageants is to follow my heart,” she said. “Do things for the right reason and you will get the right outcome.” 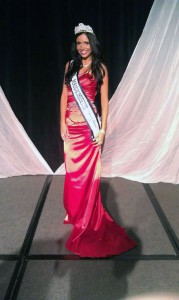