Rochester came out on top in the public safety category this second year in a row. In fact, the Rochester Firefighter’s Association won the People’s Choice Award. Last year, the association took home first place for Judges’ Choice; this year, however, they came in second behind Rochester Facilities Director Andrew Daniel who, ironically, took second place last year behind Rochester Fire.

The secret: Daniel tops off his clam chowder with a piece of fried clam, an idea the Rochester Firefighter’s Association “borrowed” this year.

“It was really my idea,” said Daniel. But the culinary creativity doesn’t stop there for Daniel. “Salt pork fat,” Daniel simply stated.

All the members of the Rochester Firefighter’s Association were confident they would again bring home the gold, pushing forward with their recipe from last year that everybody raved about – with the exception of the addition of the fried clam, of course.

Coming in third place for the Judges’ Choice Award for public safety was Fairhaven Harbormaster/Shellfish Warden Tim Cox and his team. As his longtime friend Sharon DeCosta served guests cups of “Grandma Lyla’s chowder,” a family recipe belonging to DeCosta’s grandmother, Cox was busy transferring littlenecks on the half shell cooked with garlic and butter from the grill to a serving pan, an added bonus to chowder tasters at Cox’s booth.

“It’s basic,” said Cox. No tricks or fancy ingredients, just “an old-fashioned” chowder with a thick creamy base. “I think it’s a winner. It’s what we grew up on.”

The Marion Firefighters Association came in third last year for Judges’ Choice, and returned once again with Assistant Fire Chief Allen Denham’s secret recipe. His secret is well kept, but he would reveal that one of the important tenets to his delicious chowder is the fresh quahogs he catches himself.

Fairhaven Fire Lt. Brian Daniels and Garth Rowe said they, like other area public safety departments, participated in the event this year for the good cause – purchasing new and updated equipment for the Mattapoisett Fire Department – adding, “We all chip in.”

As for Daniels’ secret, he would not share much more than this bit of wisdom: “It’s not just what you put in it, but it’s how you mix it.” Bacon, of course, is a staple to Daniels’ chowder, saying he got great feedback from taste testers.

“Nobody walked away saying they didn’t like it,” said Rowe.

Members from the Rehoboth Fire Department threw their firefighter’s hat in the ring this year for the first time, with Captain Ken “Marco” Marcotrigiano, a chef by trade, saying his chowder was a winner because of a “secret weapon” he includes in his ingredients, something he would only say was not usually a common ingredient in clam chowder.

Rehoboth Firefighter Ben Lewin said Marco impressed him when he showed up to the firehouse that morning “and just started adding ingredients and tasting it until it tasted right.”

“It came out phenomenal,” said Lewin. “Thick … there is something definitely about it, but it is our secret.”

Mattapoisett Patrol Officer Paul Andrews said he didn’t place last year, and he left that competition wondering what he could do to win the next year.

“All year I been making sure that it’s right this time,” said Andrews.

It’s a family recipe he used, which he improved upon this year. Andrews’ wife Elizabeth and their two children, Ciera and Chandler, served a steady stream of guests, representing Mattapoisett Police.

There were a total of 22 participants this year, a bigger turnout that the last, said Mattapoisett Fire Lt. Justin Dubois.

“Everything was different this year. More teams, more tents,” said Dubois. “Everything is bigger than last year’s.”

Dubois is pleased that the community has enjoyed the event so much and plans to keep the chowder competition an annual tradition. 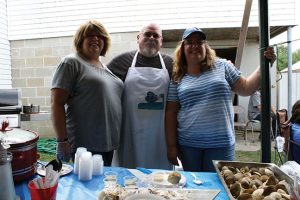 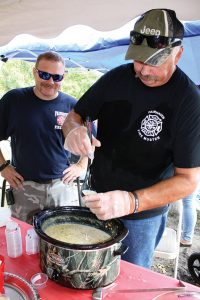 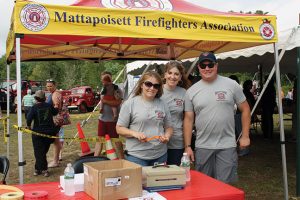 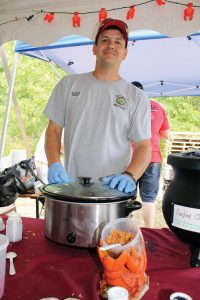 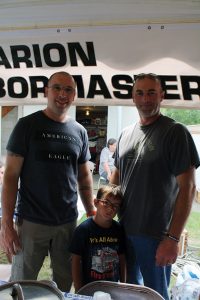 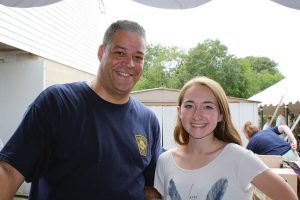 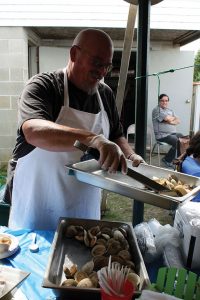 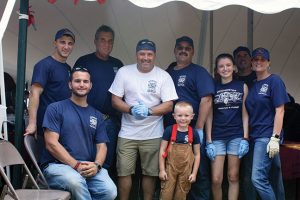 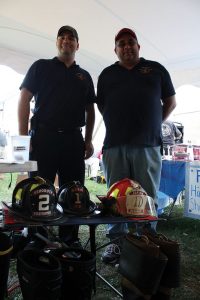