He keeps it in his wallet in a coin holder with a small cellophane circle. It’s an Indian head penny, in great condition, dated 1897. “This is the first penny I ever earned. When I showed it to my father, he told me that he was born in 1897, so that made the penny even more special, so I kept it safe from that day on,” said Tom Shire, a Marion resident.

Growing up in Dorchester in the era of the horse and wagon, Shire followed his brothers and walked behind horses around the neighborhood, hoping for some droppings. He carried a ‘coal hoard’ and a two foot long coal shovel. He was five years old.

“I sold my first pail of horse manure to my elderly neighbor, Mrs. Parker. The penny was for bringing the manure and also for spreading it all around her flowers and vegetable garden,” said Shire.

“I lived during that transition period between horses and wagons and the automobile and truck era. There were plenty of peddlers with a horse and wagon including ragmen, fruit delivery men, and others selling or delivering all sorts of goods,” said Shire. When the shovel wasn’t being used to gather manure, it was used in the cellar to feed coal into the furnace. According to Shire, the end of the shovel could hold a half dozen pieces of coal which could easily be thrust into the furnace because the handle was about two feet long.

Shire has a history in show business and owned several theaters, including the Zeiterion, during his career. “Kirk Douglas’s autobiography is titled, The Ragman’s Son,” said Shire.

He collects vintage movie memorabilia and enjoys speaking to groups about his time in the business and movie trivia. Mr. Shire reopened the Zeiterion in 1975, then known as the State Theatre and focused on showing current and classic films. Mr. Shire also brought live acts to the stage, including a circus and a Mexican Folkloric Ballet Troupe and others.

Mr. Shire said that he fell in love with the grandeur of the old theater buildings while growing up. “Half the fun was being inside a beautifully designed theater with all the elaborate details on the walls and ceilings,” he said. Mr. Shire said that his mother didn’t see the attraction of going to the theater saying she couldn’t see, ‘paying good money to sit in a dark place next to a stranger.” Mr. Shire said his mother resisted when he got a job as an usher and had to work Sundays, but she finally conceded to her son’s love of the business.

Shire says his penny brings him happiness and is a reminder of the times when he was growing up. “My parents were immigrants and would often say, ‘here in America, we have everything, and it is our duty to help others and give back’.

Another memory Shire shared was running some errands for two Scottish sisters who lived on his street. “I knew they didn’t have much, so I was aware of that and they asked me if I wanted a cup of tea, a piece of candy or a nickel for my work. I looked at the table and could see that they couldn’t spare the nickel and that they certainly liked the candy, so I said I would be happy to stay for a cup of tea.” Shire said it was his first cup of tea ever and to this day he is an avid tea drinker. “My parents taught me to always be on the lookout for ways to help other people, and it’s become a lifelong habit,” said Shire.

Shire is active around Marion and recently served on the Marion School Committee and volunteers to help out in the cafeteria at Sippican Elementary School during lunch period. “I’ve shown my penny to several teachers and students and I tell the students to not waste food and to be thankful for all they have,” said Shire. 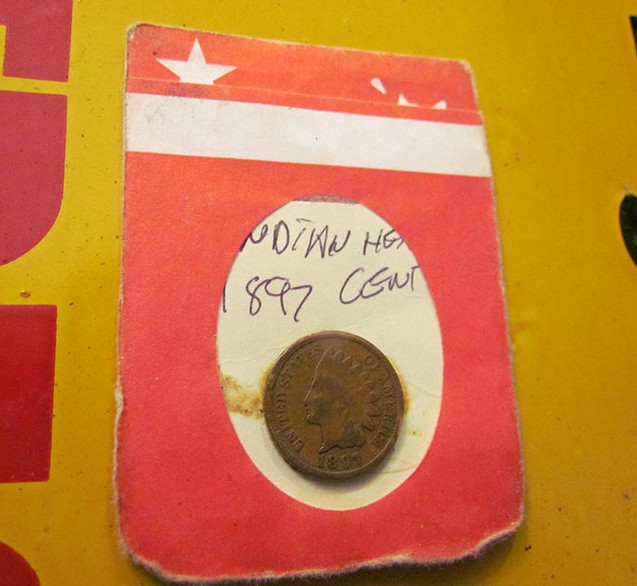