Fourth of July 2012 came and went per usual in Marion. Hundreds lined the streets in anticipation of the annual parade. Hot dogs hit the grill, lemonade quenched the thirsts of many, and everyone enjoyed the company of friends and family.

It seemed like the standard holiday, like so many in years past, only in 2012 something was noticeably different about July 4 in Marion: there were no fireworks. Due to a lack of funding, the fireworks were cut from the festivities.

Now, there’s a committee in town that’s looking to bring back one of the best parts of July 4 in Marion. The Marion Fireworks Committee is comprised of seven members including two Co-Chairmen, Donna Hemphill and Jody Dickerson, and they are hard at work raising money to ensure fireworks in 2013.

“We’ve been meeting every couple of weeks for the past couple of months,” said Hemphill.  “We’ve been working really hard. Everyone is full of ideas, there’s a lot of passion. We are really into it and really wanting to bring it back for the community.”

In order to do so, the Committee must raise $50,000. The money raised will be used to pay for the barge, fireworks, police details and other expenses.

“It’s been going quite well,” said Hemphill. “We did a mailing in December and we’ve had a pretty good response. We are ahead of where the Committee has been recently.”

Still, the Fireworks Committee has a long way to go these next seven months, needing to raise several thousands of dollars more to reach their goal. In order to do so, they are brainstorming different ideas for fundraisers.

In addition to another mailing, the Committee will be holding a beach themed gala on April 6 at the Marion Music Hall. Beer and wine will be served, as well as hors d’oeuvres. There will also be a silent auction.

Donations will be accepted over the next several months. Checks can be mailed to the Marion Town House, 2 Spring Street, Marion, MA 02738. The Committee is encouraging everyone to donate because every little bit helps. The group knows that the fireworks are more than just a colorful and festive display.

“I believe it’s a big sense of community,” said Hemphill. “It brings everyone together. It’s a celebration of independence and it’s a nice, happy atmosphere.” 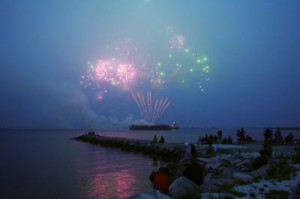