On Friday, April 27, 2012, the Marion Art Center opened its doors for a new exhibit featuring pastel artwork by local and regional artists.  Three years ago, the Art Center put out a call for artists who would be interested in featuring some of their pastel work.

“We chose 18 superb pastel artists, who were juried in by committee,” said Marion Art Center Executive Director Deborah Bokelkamp.  “We featured nine at an exhibit last year and now we have the remaining 9 artists here,” she said.

Though there was no specific theme, much of the art at the exhibition centers on the natural beauty of the South Coast and Cape Cod, with a few portraits and still-life images peppered throughout the 52-work exhibit.

“When you live in an area as beautiful as the South Coast and the Cape, you tend to paint what you see,” Bokelkamp said.

Stylistically, the artwork features images from the abstract to the literal.  From a distance, some take on a more photographic quality, while others are so softly blended, one must interpret the image for oneself.

Artist Patti Bullock of Marlborough, Conn., has been using pastels seriously since 2004.

“Before that, I was just a dabbler,” she said.  For her, the joy of using pastels lies in the purity of color.

“The pastels are pure pigment.  You can have all the colors of the rainbow on your palette,” she said. Her inspiration comes from all directions, which adds a touch of mystery as to what she may create next.  “It’s a question of what grabs you at the time.”

Also on hand at the exhibit was artist and Cohasset resident Yvette Rattenbury, whose pieces focus on the natural beauty of the Cape, from stark white birch trees to smooth fingers of water that quietly grip around rocks.  Though she has been an artist her whole life, she has only been using pastels for about 10 years.

“My older sister did a lot of portraits in pastels. That’s how I got introduced to it,” Rattenbury said.

The  2012 All Pastel Exhibition runs from April 27 to June 5, 2012 at the Marion Art Center, at the corner of Main Street and Pleasant Street. 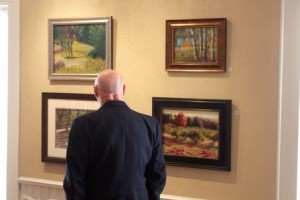