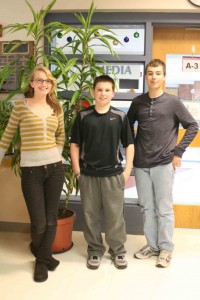 Some local youth are showing that giving back begins at any age.

Due to their contributions to society, Old Rochester Regional eighth graders Holly Frink, Evan Roznoy and Jared Wheeler recently were chosen to participate in a special day of community service, leadership development and networking with Governor Deval Patrick on January 14, 2012.

These youth will represent Mattapoisett, Marion and Rochester as part of Project 351 – a “youth congress” formed each year with eighth grade “Ambassadors” throughout the commonwealth to celebrate service and civic leadership.

The students were nominated by their teachers for embracing the ethic of service, or as the nonprofit Project 351 describes it, for embodying “humility, integrity, compassion, commitment and generosity of spirit.”

Each of the three eighth graders in one way or another give back to the community.

Mr. Roznoy, for instance, is active in the Mattapoisett Boys Scouts and participated in related projects feeding the elderly, restoring an old fence around the Mattapoisett Historical Museum with the Lands Trust, and planted new trees.

In his recommendation letter, ORR instructor Angie Vaughn said Mr. Roznoy “flies under the radar never looking for praise. This experience will encourage him to embrace his natural leadership skills.”

“In terms of integrity and generosity, Evan always puts what is ‘right’ ahead of what is ‘popular,’” Ms. Vaughn added.

Mr. Roznoy said he is excited to go to Boston, adding that the ethic of giving back is alive and well with today’s youth.

“A lot of people do community service, much more than what people would normally think,” Mr. Roznoy said.

Mr. Wheeler of the eighth grade trio also expressed enthusiasm for the event. He said his current service includes tutoring seventh graders and helping ring the bell for the Salvation Army at Plumb Corner Mall in Rochester. He said the latter experience has shown him the generosity in people.

“He always demonstrates a polite and responsible demeanor, and his work ethic is above average,” said ORR instructor Jeffrey Lombard in his recommendation letter for Mr. Wheeler. The event “will bring a stronger sense of his potential leadership to our school and community,” he said.

Eighth grader Holly Frink also is steeped in volunteerism, giving her time to an animal shelter, regularly helping out at a New Bedford soup kitchen, and starting a fundraising page for Invisible Children – a nonprofit that helps children in Uganda.

Ms. Frink “exemplifies community” and is “just as helpful [in] her day to day interactions with her peers,” said an unattributed recommendation letter.

“Not everyone would give up a Saturday to volunteer,” Ms. Frink said, but said many young people still do find a way to help – even if just by donating to a cause online.

“These are all good kids,” Principal Kevin Brogioli said of the Tri-Town Ambassadors. He said last year the three students enjoyed the community service work and loved meeting the governor and celebrities – such as the Boston Celtics’ Ray Allen – who participated in the event.

Therese Valente, who chaperoned Project 351 last year, said that day of service in the state’s capital impressed her.

“There were so many kids there, I was impressed with how they wanted to help. It was amazing to hear what the kids do in their communities,” she said.

“It was uplifting. I left feeling like there is hope in the world.”