You are here: Home » Features » Local Woman Fighting for a Cause

Mattapoisett’s Shannon Leary is literally fighting for a cause. Leary has accepted a challenge to “knockout cancer” and is putting up her dukes during a months-long fundraising effort to raise funds for Dana Farber and the Jimmy Fund.

This year at the 2014 Belles of the Brawl, Leary will represent Mattapoisett in the ring as she throws punches on behalf of those battling cancer, hoping to raise a minimum of $4,000 to make the endeavor a success. So far, she has raised $3,100 and she is hoping her hometown of Mattapoisett will help her kick butt to surpass her fundraising goal.

The fundraiser is organized by Haymakers for Hope, which gives everyday people the chance to train and compete in an amateur charity boxing match on October 2 at Club Royale in Boston. The participants have no prior boxing experience and are assigned a local gym to train intensively for the event during the weeks leading up to the big day.

“I’ve always been an athlete,” said Leary. She regularly participates in local events such as the Mattapoisett Road Race and Triathlon. “I always like to try something new, athletically.”

Leary said she recently lost a dear friend to cancer, so this fundraiser is particularly close to her heart. “It’s really an experience for me,” said Leary about learning to box and raising awareness of the fight against cancer. “It’s like a roller-coaster and I’ve only just started last week.”

Boxing – this is quite out of her realm, said Leary, embarking on this four-month long life-changing journey.

“What I have learned the past few months boxing is that you have to really, really, really commit to boxing. You can’t just do it when the mood strikes you,” said Leary. “Boxing is not like skiing or tennis; it is not something you can do once a year, on vacation, or on a weekend off.” Boxing, Leary said, even at this amateur level, requires “dedication, discipline and guts.”

Leary used to be a math teacher “many lifetimes ago,” teaching students how to tell time and, now, even a 30-second period of time messes with her mind while she is training for when she steps into the ring.

“Try punching with all-out speed and power on a bag for 30 seconds and you’ll know what I am talking about,” said Leary. She will have to contend with that, along with someone trying to punch her in the face while punching back, or course.

Leary said she finds the fundraiser both worthwhile and intriguing to her.

“Additionally, I wanted to show my seven and eight year-old sons that their mom is their mom, and is also an athlete,” said Leary. “As with those battling cancer, I want my boys to understand part of life is striving to set and work toward achieving goals and in both cases the process requires hard work.”

Love, determination, persistence, and belief are the characteristics of a person who is battling cancer in their life, said Leary – and this is her way of honoring those who are “fighting the biggest fight of their lives.”

“I would like you to join me and become a part of something bigger than any of us and hopefully ‘knockout’ cancer!

If you would like to support Shannon Leary fight for those battling cancer, you can visit her fundraising website at https://www.crowdrise.com/ShannonLearyh4hbelles2014.

You can purchase tickets to the event and the proceeds of the tickets go directly into Leary’s fundraising account.

The Belles of the Brawl II is October 2 at 7:30 pm at Club Royale, located at 279 Tremont Street in Boston. 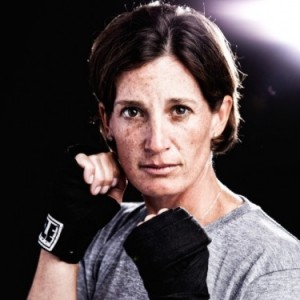