When Commander Michael Lamoureux of American Legion Post 280 introduced the guest speaker on May 25 for the 2015 Memorial Day ceremony in Mattapoisett, he noted that the biography U.S. Army Sergeant Edward Sweeney, Jr. submitted for the event program was a short one. At age 38, he enlisted in the U.S. Army National Guard and was eventually deployed to and stationed in Afghanistan from 2012-2013. Sgt. Sweeney now lives in Mattapoisett with his wife, Cheryl, and their children.

After the short introduction, Lamoureux supposed Sweeney was a humble man, possibly of few words. Sweeney’s words were few, but they were poignant, stirring the emotions of guests in the program and onlookers in attendance gathered in front of the Mattapoisett Library.

There are only two things that scare him, said Sweeney. They are spiders and speaking in public. “And this is a first for me,” Sweeney said, shaking off the nerves with a few chuckles from the crowd.

He has been home from Afghanistan for two years now, “But things are still pretty fresh.” Sweeney continued, “But this day isn’t about me.” It’s about the warriors who have gone before him, he said.

“Today is about honoring and remembering those who never came home.” Sweeney said he and the veterans seated behind him and all those who enlist, all sign the same check made out to the United States of America “in the amount of and including our lives.”

“[And some of them] cashed that check in the name of freedom,” said Sweeney. He then began reading the names of local fallen heroes, beginning with Marine Lance Corporal Matthew Rodriguez who was killed in Afghanistan in December 2013. Sweeney then listed a number of names of those killed in action from the South Coast area.

“I could stand here all day and list the names of our fallen comrades,” Sweeney said.

Sweeney encouraged those in attendance to go home afterwards to enjoy a cookout, a barbeque with friends, any way they like and not to feel guilty in anyway about celebrating on Memorial Day.

“Just enjoy it. It’s what we fought for and what we died for,” Sweeney said. “Don’t ever feel guilty…. Because that’s what the American life is and that’s what we’ll fight to protect.”

“There are two powers that have offered to die for you,” said Sweeney just before concluding his speech. “One of them is Jesus Christ. The other is the American soldier.”

Lamoureux and Veterans Agent Barry Dunham presented Sweeney with a certificate of appreciation before concluding with the retiring of the colors, the laying of the wreaths on the War Memorials, and the parade over to Cushing Cemetery.

During the ceremony, Representative William Straus also delivered a speech recognizing the missing presence of Evelyn Pursley, who served at the American Legion Post 280 for many decades and died on August 24, 2014 at the age of 92.

“It’s something to get over that she couldn’t be with us,” said Straus, “and we feel that loss.”

Board of Selectmen Chairman Jordan Collyer in his speech stressed the importance of supporting veterans’ services such as the American Legion whose membership dwindles year after year.

“As membership dwindles … their support dwindles,” said Collyer. “The Legion is under a lot of stress…” The Legion, he reminded guests, is what organizes community events such as the Memorial Day ceremony. “It’s getting tougher and tougher to keep things going.”

Denham echoed those sentiments in his address to guests, saying the Legion is having a hard time trying to keep its doors open. Denham, who recently stepped into the Vets Agent for the Town of Marion – regionalizing the three Vets Services Offices – said last October there was only one veteran in Marion receiving benefits, much lower than the seven in Rochester and the 12 in Mattapoisett.

“Marion is now from one to eight people,” said Denham. There were seven vets in Marion that should have been collecting veterans’ benefits, but were not due to a lack of awareness of the program.

Denham stressed the importance of maintaining “strong vets agencies like the Legion.”

Old Rochester Regional Junior High School student Carly O’ Connell recited President Abraham Lincoln’s Gettysburg Address as the sun came in and out from behind the clouds on the bright breezy afternoon.

Lamoureux, although having heard the Gettysburg Address many times, was still moved by the President’s words.

“Abe Lincoln,” said Lamoureux, who paused a moment with emotion. “He really said it all. Short, concise.”

Unfortunately, due to some problems with the logistics of the morning, transportation was unavailable to bring in the New Bedford JROTC Battalion to Mattapoisett for the retiring of the colors. Lamoureux said none of the usual drivers were available that morning to pick up the JROTC, so Lamoureux turned to the Mattapoisett Police Department and asked for its assistance.

“And I didn’t even have to bend my knee because they jumped at the chance to carry the colors,” said Lamoureux. 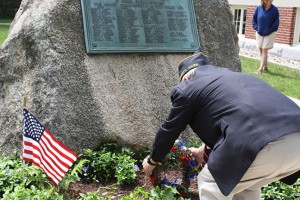 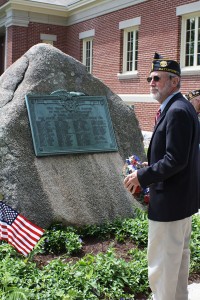 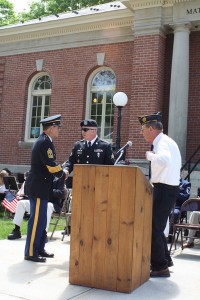 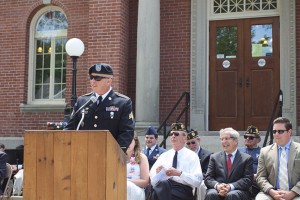 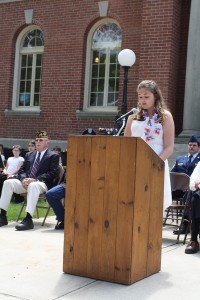 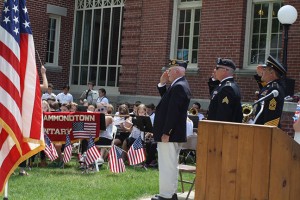 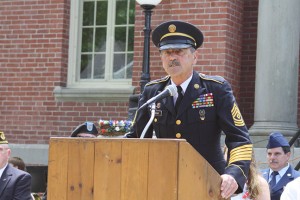