Some members of St. Rose of Lima Church in Rochester are heading on a mission trip to Puerto Rico, joining two other parishes as part of the Cranberry Catholic Collaborative’s Mission Team.

The group of predominantly older children and young adults, along with supervising adults, got a taste of what it is like to grow personally while helping others in need last year while on their first-ever mission trip to the Adirondacks. According to CCC Mission Team co-leader Lori Handerhan, who resides in Middleboro, it was all the kids’ idea in the first place.

It all started after Handerhan and co-leader Eleanor Hurley accompanied two sophomore girls from the church to a week-long camp that taught kids how to be youth leaders. This ignited a desire to make an impact on people in need, and the girls inquired about starting a mission group.

“We were like, sure!” said Handerhan on Tuesday during a phone interview.

Last year, a CCC Mission Group went on its first mission to the Adirondacks in a remote area outside a town called Warrensburg in New York.

With the intention of “starting small,” said Handerhan, the group chose a location they could drive to, and the Christian group Youth Works coordinated the trip and all the activities and accommodations while the group was there.

The dates lined up, and with some “spiritual preparation,” as Handerhan put it, it all fell into place.

“It was one of those things that felt like it was meant to happen,” said Handerhan. “Needless to say, it was a great trip.”

For the group, it ended up not just being about how they could physically assist the people they met there, but also the other half of helping – the emotional part.

“For me, that was huge,” Handerhan said. “It isn’t just about what you physically do to help people. It’s about being there for them emotionally.” It was about letting go of the idea of simply doing X, Y, and Z, she said – the stuff like painting a house and helping to build. “But also, that person wants to talk to you, make lunch for you.… It was very enlightening.”

The group made friends and there were tears shed when they left. Handerhan said she watched the kids, who had never done anything like the mission trip, come out of their shell.

This year, the mission group is heading to Puerto Rico for its second mission trip and has started its fundraising campaign.

“This is a much bigger trip than last year,” said Handerhan. “Puerto Rico was so widely in the news.” One woman on the mission team, she added, is from Puerto Rico, making the connection between the two locations a tad stronger.

This trip will really bring the younger members in the group out of their comfort zone.

“I’m hoping we all see that, when people are in crisis situations, what really matters to people,” said Handerhan.

Yes, people have lost their homes and their belongings and are experiencing true hardship, “But most people are just thankful their families are okay,” she said.

“For us who have so much here,” Handerhan said, “I just want them to see what it’s like and see what really matters in life compared to the materialistic things.”

That, and the simple satisfaction of helping, she said.

“I’d always wanted to have a mission group, but waited for the youth to force the issue,” said Handerhan. “So when the kids finally said, ‘Hey, we want to do it,’ that was the impetus that got it started, and hopefully it will continue.”

The group will be embarking on their mission this summer and has started a fundraising program to cover the cost of transportation and accommodations while abroad.

To find out more or to make a donation, visit www.cranberrycatholic.org and click on the link just below the heading “Collaborative News”. 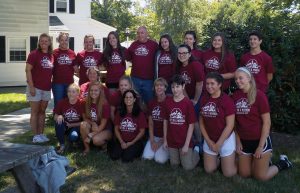