You are here: Home » Features » Local Gymnasts Compete on International Stage
Three local gymnasts competed in Florida this past weekend in the Sand Dollar Whitlow International Gymnastics Competition.  Jillian Rawding of Wareham, Peyton Villa of Marion and Brielle Benoski of Dartmouth all represented Southeastern Massachusetts in the competition.
The competition was held at ESPN’s Wide World of Sports in Florida.  Rawding placed fourth in the all-around, Benoski placed fourth on the vault, and Villa placed sixth on the uneven bars, even though she was competing with stress fractures in her back.
The girls train at Rise Gymnastics in Coventry, RI. 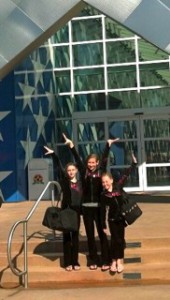