The Mass Pride 16U team based out of Bridgewater won the New England Elite Baseball league Division 1 Championships last weekend. Fresh from their successful trip from The Perfect Game Tournament in East Cobb Georgia last week, he Mass Pride team defeated the Firebirds from Peabody, Ma 5-2.

They lost a close game to the Scorpions from Stoneham 3-1. They then fought their way out of the losers bracket defeating the Firebirds 6-2.  Next, they defeated the Scorpions 3-2 in the semi-final round. In the championship game, the Pride defeated the Stampeed out of Reading, Ma 2-1. 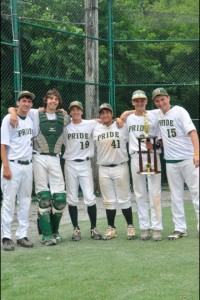