Put the Mattapoisett Lions Club together with the Harlem Ambassadors and the outcome can only be positive. When a local organization of volunteers that raises money to assist community members in need teams up with comedy-basketball players performing stunts and slam dunks, what you get is a win-win situation – what they do is put the “fun” in fundraising.

“The Harlem Ambassadors are a group of very talented people,” said Bamberger. “They have a very good theme about staying in school and staying off drugs.”

All the proceeds from the game will go to the Rochester and Mattapoisett Lions Clubs and stay within the community to financially assist the residents who need it most.

Bamberger said the Lions Club’s recently provided financial assistance to two disabled residents to build an access ramp for their houses. The Lions Club also assisted one of the residents with the labor to construct the ramp.

“The Lions can’t do anything without the support of the community,” said Bamberger. “It’s the community that helps us to do what we can to help others.”

The Lions Club hosts events like the Harlem Ambassadors game and, among other things, Mattapoisett Harbor days which, last year, was hampered by bad weather, said Bamberger, which had an effect on the club’s ability to serve others.

“Our little nest egg isn’t as big as we hoped,” said Bamberger.

Some of the proceeds will also go directly to students at ORR to participate in after-school extracurricular activities.

Tickets for the event cost $10 for adults and $8 for students, which will be available at the door or can be purchased in advance at www.brownpapertickets.com. What you get is access to the pre-game tailgate party outside at 5:30 pm when volunteers will serve hotdogs and hamburgers off the grill. The game starts at 7:00 pm and, later on, kids will be invited to join in and participate in a bunch of different activities on the court. There will also be a café set up at the far end of the gym. After the game, everyone is invited to meet the Harlem Ambassadors during an autograph-signing session. 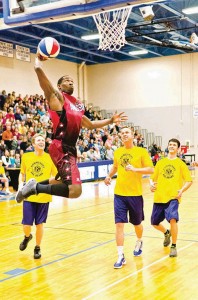