You are here: Home » Features » Lions and Tigers and Bears, Oh My!

Everyone picks the road they must travel upon, and the Old Rochester Regional High School Drama Club chose one paved with yellow brick.

The club will perform The Wizard of Oz this Thursday through Saturday, March 31 to April 2, starting at 7:30 pm. There will also be a Sunday matinee on April 3, scheduled for 2:00 pm.

The stage version of the classic movie has some adaptations to accommodate for the restrictions of the theater, but that doesn’t mean it’s any less than the classic film. The show, in fact, contains musical numbers that were cut from the original film.

In addition to some extra material, the stage version allows for the actors to add in their own senses of humor and explore the different emotions the characters feel at any given moment. This makes for an entertaining show that is enjoyable for a person of any age, old or young.

“The audience can look forward to a night of pure magic, truly,” as Director Paul Sardinha describes it.

The costumes for the show promise to be a spectacle of beautiful colors and designs, says Head of Costumes Helen Blake.

“The audience is going to see an awful lot of different colors, a lot of whimsical designs, along with the traditional Wizard of Oz costumes,” said Blake. “We’re trying to make a lot of things colorful and sparkly and bright.”

Sardinha said the main difficulty in putting on such a well-known show might not be exactly what one might expect.

Trying to find the harmony between creativity and a pre-existing film is a delicate balancing act, one that the Drama Club was able to skillfully master for The Wizard of Oz.

The theater is much more than it appears to be. Those who partake in the Old Rochester Drama Club are fiercely dedicated to it, and being a part of the show offers a learning experience for everyone involved.

Hannah Deane, who plays Dorothy, has discovered the true depth of human love for animals, as well as some useful dancing techniques.

“I’ve learned how to dance a little bit better than I did before, and I learned that people have a strong compassion and connection to their animals, more so than I have with just my cat,” said Deane.

The members of the Drama Club have become connected to their characters and have discovered the inner workings of them in a way one can only discover if they have spent time acting as another person.

“I’ve learned a lot from the lion about being diverse,” said Kyle Costa, who plays the Cowardly Lion. “From being the frightened idiot to being the brave one, to being a king – I never have done a role that’s been so diverse in my entire life, even though his one job is to be a coward….”

But Costa isn’t the only one who feels they have attained a deeper understanding of their character.

Nicholas Claudio, who plays the Tin Man, explained: “I like the Tin Man because, even though he thinks he doesn’t have a heart, he’s clearly the person who cares the most.”

As a whole, the drama club has put in countless hours of hard work into this show to make it the best they physically can.

Claudio, however, has a little bit more of a hurdle over which to jump.

Claudio happens to be blind, due to an orange-sized brain tumor discovered when he was younger. Yet, despite this disability, Claudio has done an amazing job as one of the leads for the show.

The difficulties he encountered, he said, were more about getting others normalized with his particular challenge.

Throughout his experience in The Wizard of Oz, Claudio has learned how to orient the others with his disability, he said.

“I learned how to make the strong emotions that the Tin Man has throughout the play, and I learned how to speak sweetly but loudly,” said Claudio. “I’ve also learned a little bit about how to get other people to be used to acting with my disability.”

From the chorus, the audience can expect to see enthralling dance numbers, as well as the usual singing, with harmonies, of course.

The students backstage who diligently move set pieces, affectionately dubbed “techies” by the drama club, have their work cut out for them. There are many large set pieces for this monumental show, leaving very little room for a person to walk around, let alone move sets around.

But for the cast and crew, the festivities don’t end when the show does. On Friday night, the members gather for a long night of bouncy castles, movies, food, and overall excitement as the traditional sleepover kicks into gear with a late breakfast served immediately after the end of the show.

Saturday is, for most members, a day of sleep and recovery after the long sleepover, so that they are ready to perform the Saturday show.

Sunday is always a bittersweet day for the drama club. It is the last performance for the seniors, and the set has to be torn down. Despite the sadness felt as one takes down the show they worked so hard on for months, there’s still excitement as the promise of dinner and cake awaits after the set is broken down.

This weekend, if you happen to be looking for a way to rid yourself of any cares – if only for a few hours – pack up the kids (or even just yourself), and get ready for the ORRHS Drama Club to guide you through a wonderful night in the magical land of Oz. 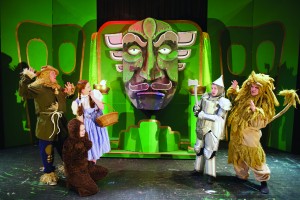 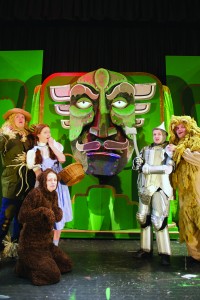