The former American Idol and X Factor contestant from Rochester is home, and in the middle of raising funds for her debut album – and if you donate $5,000 to her Kickstarter.com fundraiser, she promises she will tattoo your name on her body.

So far, 21 year-old Jensen is inching closer to her goal to raise $15,000 to help pay for the production and promotion of her first album she says she will start recording in August.

Kickstarter.com is an effective way for people to raise money for an array of artistic projects, but there is a catch – if you do not reach your goal by the 60-day deadline, you do not get any of the pledged funds. Jensen says she actually needs $27,000 to fully fund the album and the accompanying music video, but she figured $15,000 would be a safe number to start with.

As of press time, Jensen has gathered 169 “backers” for a total of $11,864 — and she still has 48 days left to reach her goal. Her highest pledges so far have come from two backers pledging $1,000 each, which entitles them both to a day in the recording studio with Jensen and a free download of the album.

Pledge $2,500 and you get your name listed under the special thank you section of her album, a signed album, an autographed photo, a personal letter, a personalized video of Jensen covering your favorite song, and a private live web stream of one of her recording sessions.

“Even if the whole amount isn’t raised, I’ve been saving my own money,” said Jensen. She said she really does not want to have to host a bunch of fundraisers, but she does have an organization called “The Magic of Music” that raises money to grant scholarships to aspiring musicians.

“I was thinking about doing one huge fundraiser for the two projects and put on a huge show.” She said half the proceeds could go to fund her album, and the other half to scholarships. “Car washes are always fun too,” laughed Jensen. “Why not?” She imagined calling in some fellow musicians and a few of her American Idol friends to help her wash cars. “I’m not going to resort to that, but it would be funny.”

“The songs are all from a really reflective point,” said Jensen. “I fell into a sort of depression after the X Factor. I was a little in a dark place. I didn’t want the songs coming from a dark place.”

She wanted her songs to come from an emerging positive point in her life.

“I’m not a story,” said Jensen. I’m a human being. I’m a musician.” She said she knew she wanted to be a musician “literally, since I was born.” She was singing before she could even string together a sentence.

Her mother was a singing coach who used to sing to Jensen as a child. Jensen started writing songs when she was eight years old, strongly influenced by jazz singers like Ella Fitzgerald and Billie Holiday. Her father later turned her on to more rock and country singers, most notably Johnny Cash.

Jensen’s style of music, she said, is “very country-rock-blues.”

“I guess vocally – Amy Winehouse is what I hear the most,” said Jensen, who described her voice as sultry. “But I don’t really think I sound like her.” Jensen plays an impressive six instruments: guitar, piano, bass guitar, drums, saxophone, violin, and the ukulele.

Jensen is going to release a single in July and backers of her Kickstarter.com fundraiser will get a free download of the single as soon as it is available. The different levels of support for Jensen’s album range from $5, $10, and $25, up to $100, $250, and $500, all the way up to the big bucks.

“Every dollar, even the smallest donation would mean the world to me,” said Jensen.

As for the tattoo, Jensen said she is getting the tattoo as a symbol to mark this amazing, exiting time in her life.

“If someone’s willing to give me $5,000, they deserve to be a part of the history,” said Jensen. “I would love to have peoples’ names in my tattoo…and I’m serious about it, really.”

You can visit Jillian’s Kickstarter page at www.kickstarter.com/projects/983394009/help-jillian-jensen-make-her-debut-album. 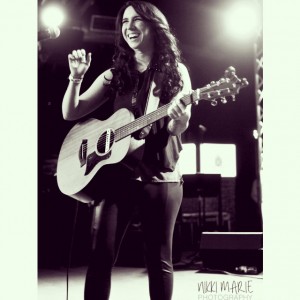