You are here: Home » Features » Hunters of History

Bob St. Onge of Rochester and Tom Smith of East Wareham have shared a passion for treasure hunting with their metal detectors since 1972. Together, they have found some pretty curious and fascinating bits of history along the way, too.

On August 20, the two men gave a metal detector search demonstration to the Rochester Historical Society and also brought along with them some of their favorite finds from various locations they have visited in the past.

These artifacts included an English colonial halfpenny dating back to 1745, a Texas bus token from the 1950s, and various colonial shoe buckles and other miscellaneous items and coins. Historical Society members with an equal passion for relics from the past marveled at the found objects and eagerly anticipated the two men to start scanning the grounds of the Old East Rochester Church that evening to see what they could find for the Historical Society to treasure for future generations.

“We wanted to offer our service to the Rochester Historical Society to find anything at the site to become part of the museum,” said St. Onge.

Scanning historical locations and sites are of particular interest to the two men, who say, if invited, they would even scan your property for free and let you keep whatever they find.

“We always say it’s like fishing,” said Smith. “You catch a big bass and then you throw it back in.” He said it’s all about the hunt and the chase. “That’s the biggest part of it,” said Smith.

Smith and St. Onge consider themselves “metal detector hobbyists” and have partnered up together during many a find. They even share a business card with both of their names on it. They go on hunts to various locations locally and patiently scan the area until they hear those bleepy sounds signifying the location of something metal, and perhaps something precious.

“I’ve found a few really nice rings and a couple gold chains,” said Smith. He said one of the most exciting finds was years ago on Staten Island when his metal detector started sounding, leading to the discovery of a European gold coin, laying right where it was dropped, probably a century ago. “I was really amazed,” added Smith.

That evening during the search at the church, there were no gold coins or buried treasure, per se. But the men did turn up an old metal door hinge, like one that might have hinged a large door to an old barn, as well as an old bent penny and a hunk of iron, all for the Historical Society to keep. Like Smith said before, it is all about the excitement of the hunt rather than the monetary value of the items he finds.

The two men are both retired and say now they have the time to spend enjoying their hobby – and they are always looking for new places to take their metal detectors to hunt for hidden, historical, or lost objects.

“It’s just one of those enjoyable hobbies,” said Smith. “That is, if you don’t mind getting dirty every once in a while.”

If you have a historical site or a piece of property that you think would be fun or interesting to have scanned for metal objects – for free, the two men add – then why not invite Relics Plus Metal Detecting Services and their metal detectors to come check it out?

You can reach Tom Smith and Bob St. Onge at thomassmith419@comcast.net or vett1967@comcast.net, respectively – and afterwards, don’t forget to contact us at The Wanderer to report what you find at news@wanderer.com! 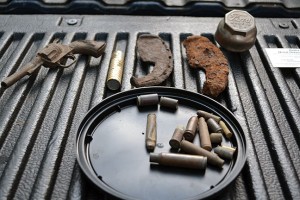 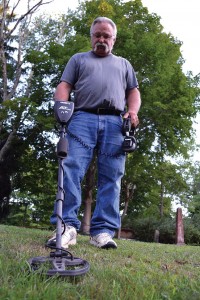