Alewives Anonymous is excited about a 156 percent increase in the number of herring during this year’s annual herring migration count. This year, the group counted 55,429 alewives (herring) in the Mattapoisett River, almost 34,000 more fish than the 2013 count of 21,613.

“We don’t have any explanation for such a large increase,” said Benner during a phone interview on July 7. “In 2012 there was about a 100 percent increase, and that was a surprise.”

Starting in March, the group monitored the counters located within the Mattapoisett River and the Sippican River where they visually witnessed a lot of herring at different times, which leads them to believe that their counters are functioning accurately. On some days, the group counted 6,000 to 8,000 herring a day.

Benner’s passion for helping restore the herring population stems from his childhood days when he would watch the herring climbing the ladders. He said back then, there were so many herring in the water, “It was thick enough you could walk across on them.” And over the years, he said, the herring decreased every year due to overfishing and a decline in the quality of the river.

In 2000, according to Benner, Alewives Anonymous counted 130,000 herring, but then the bottom fell out the next year when only 5,000 were counted. Benner said this trend was witnessed all along the east coast. In 2004, there were less than 5,000.

“And it just dropped off by half, year after year,” he said.

Benner said he hopes Alewives Anonymous can keep the momentum going, and he pointed out that two or three years ago, Tri-Town had a significantly successful spawning season. But it takes about four years for the fry (baby herring) to mature and return to the pond to spawn.

“We’d be very happy to see it hold its own over a few more years,” said Benner.

The rain that preceded Hurricane Arthur might have incidentally given this year’s spawn a big boost with all the water it dumped on the Tri-Town area. It rejuvenated water levels in the rivers and ponds, which is essential for the fry’s first journey to the ocean. If water levels are low, said Benner, then the fry are forced to remain in the ever-evaporating ponds throughout the summer, making it likely that larger fish in the pond would eat them.

“It would be a big benefit if we could get them out of the pond early,” said Benner.

Herring are smack dab in the middle of the marine life food chain, between feasting on plankton and being feasted upon by larger fish such as bluefish and bass, as well as birds and seals.

Of the 80,000 to 100,000 eggs the herring spawns, Benner said only two or three adult herring actually make their way back to Snipatuit Pond and Leonard’s Pond, Tri-Town’s two main spawning sites. 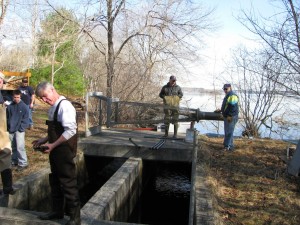