The eminent naturalist, essayist, and author of Walden, or, Life in the Woods, was also a transcendentalist who believed that he could glean from nature the true meaning of God. To do this, he built a one-room cabin at Walden Pond in Concord, Massachusetts on property owned by his transcendentalist friend Ralph Waldo Emerson.

Henry David Thoreau’s book was based upon the diary he kept at Walden from 1845 to 1847. It turned out to become the leading forerunner of environmental writing and exploration of the natural world. It also became the most revered expression of moral idealism and intellectual standards of his human purpose of existence. His moral intellect went on in time to inspire future readers and philosophers such as Gandhi and Tolstoy.

In 1862, Thoreau was visiting his friend Daniel Dickerson in New Bedford and happened to see a portrait of Martha Simon, the last full-blooded Native American in Fairhaven. It was painted by the renowned Albert Bierstadt, who had a studio and artistic following in New Bedford in 1850. Bierstadt gave it to win the favor of Henry Huttleston Rogers, founder and benefactor of many present-day landmark Fairhaven structures, including the Millicent library where the painting can be seen today.

Thoreau wanted to meet Simon to ruminate about the natural lore of native observation compared to his own. However, such a meeting such was not, in any way, going to be helpful.

When he went to visit her hut, even smaller than his at Walden, it was situated on the shoreline of the narrowest part of Sconticut Neck. She had a tawny Indian face, broad with high cheekbones, black eyes, and straight hair. To judge from her physiognomy, he said she might have been King Philip’s own daughter. But she had a very vacant expression, could not speak a word of Indian, and knew nothing of her race, in spite of being nearly 70 years old. She was indifferent to Thoreau’s presence and kept looking out the window to enjoy the view more than their meeting.

The main focus of their conversation was her asking about the flower Thoreau had tucked into the band of his hat. She told him it was a husk root, as in my illustration, which is intensely bitter, and used to put into bitters for weak a stomach. At that point Thoreau wished he had brought a hat full of plants to embellish their mutual interest. But the intention of the visit was futile. Thoreau went away, undaunted, to continue a collection of writings including one on civil disobedience. It became a forerunner of the concept of social conscience to personally demonstrate against cultural and social injustice.

Thoreau died in 1862 and is buried in a section of Sleepy Hollow Cemetery in Concord entitled “Authors Ridge,” laid to rest beside Emerson, Hawthorne, Alcott, and Channing, all followers of a social movement to pen progressive ideals to shape the direction of national thought.

Martha Simon died in 1858, and her death certificate said she was buried in Woodside Cemetery. However, in 1907, historian Franklin Howland said she was buried in the Sconticut Neck Simon family Indian burial ground, a stone’s throw from Wampanoag Road that runs at right angles to Indian Road and Wigwam Beach Road. She had been born near that spot and now lies there with her elders, William and Abigail Simon.

This burial site is just a short stroll from the back porch of my seaside residence on Little Bay. There are only a handful of weathered head and footstones laid out in a family configuration. My afternoon walk can take me around the shoreline bend of a prominent point looking out with an ethereal view, like many burial grounds I have visited.

Thank you for joining me on this trail back in time to share a tale of local history with you. 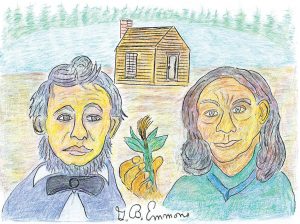