You are here: Home » Features » Harbor Cruise with Habitat For Humanity

The Buzzards Bay Area Habitat for Humanity held their annual harbor boat cruise on Saturday, July 28, 2012, and as usual, it was a great success.

Gray and threatening skies didn’t stop the dozens of people who attended the fundraiser, which departed from New Bedford State Pier, headed west toward Dartmouth, and looped back around.

“We used to have the cruise on the Cape Cod Canal,” said Christine Lacourse, executive director of the local Habitat for Humanity chapter.  “Recently, we switched it to New Bedford.”

The cruise has been a long-standing fundraising event for about five years and “is always a success,” according to Lacourse.

“Our goal every year is to sell 100 tickets and this year we surpassed that.  The money goes to help build affordable housing in the eight towns we’re involved with,” Lacourse said.  Those towns stretch from Wareham to Dartmouth.

The current project involves property on Route 6 in Marion, which is awaiting its new dwelling. Lacourse said that they are looking to begin construction in the fall and estimates it will take anywhere from six to nine months to complete the home.

“I like it for what it goes to help.  The people here are all humanitarians and I like that,” said Kirsten Taylor of New Bedford.  She also mentioned that her daughter helped build a house in North Carolina with Habitat for Humanity a few years ago.

Lynn Whitney, formerly of Marion, has brought Taylor to the cruise with her for the last three years.

“This is always just a beautiful time for a good cause,” she said.

For more information on the Buzzards Bay Habitat for Humanity, visit their website at www.buzzardsbayhabitat.org/. 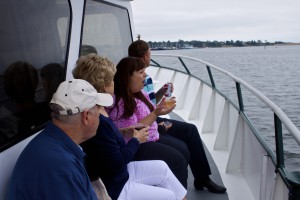