You are here: Home » Features » Hamlin: Eyewitness to History

I recently attended Seth Mendell’s lecture on the building of the Cape Cod Canal in honor of its centennial anniversary. Surprisingly, Mendell began the history of the canal with the Pilgrims settling in the area. From then until now, the Cape Cod Canal has been a figment of imagination and a massive flowing reality. With a blank canvas upon which to draw the rich local history of this major historical event, Mendell filled my brain.

Yet, stepping through the mists of time from that auspicious day in July 1914 stood one person: Huybertie Hamlin (b. April, 1878 – d. March, 1964). She was there observing and experiencing first hand all the monumental changes that took place in the late 1800s and through to the mid-1960s. Living in a time that saw the industrial revolution propel the world into new areas of thought and mechanical ingenuity, she was a woman slightly ahead of her day. A contemporary and lifelong friend of Franklin Delano Roosevelt, Hamlin hobnobbed with the rich and famous, a social group into which she was born in Albany, New York.

Although I was thoroughly delighted and enlightened to learn the history of the first and second Cape Cod Canals (yes there were two, well, sort of two and a half), it was she who intrigued me, she who seemed to want her eyewitness account to be heard again. Thanks to Hamlin’s chronicling of this wonder of construction capabilities, we can still hear her voice.

But first let me give you the briefest history of the Cape Cod Canal you’ll find anywhere. As far back as the days when Myles Standish and his contemporaries roamed the sandy beaches at Head-of-the-Bay in Bourne and beyond, a canal was imagined. Assuredly not on the scale it is today, they envisioned a more modest canal similar to those that were common throughout northern Europe. Something comparable to the small cuttings with locks that were sliced through Britain, Holland, and France to help manage the water’s depth, currents, and tides and which allowed easier movement of people and goods even though they most likely allowed traffic in a single direction.

And so the notion of digging through the Isthmus of Cape Cod was pondered for many centuries. Along with Standish, George Washington thought about a canal, Dutch traders from New York and Pennsylvania thought about a canal, as well as more southerly merchants who wanted to get their goods to Boston and north to Portland. They had the foresight to dream, but lacked the technological wherewithal. All these people believed it could and would one day be done; the need was great.

Without a canal, those wanting to get from Cape Cod Bay to Buzzards Bay and vice versa had to navigate rivers that were little more than streams and then portage overland or sail 165 miles around Provincetown. There were numerous attempts throughout the 1800s, and the Senate conducted a study in 1818 that went directly into a library never to be seen again. As commerce was increasing along with tourism to the Cape, all the canal idea needed was time, money, and know-how.

The Ship Canal Company tried to build a canal. It sold shares in what was slated to become a for-profit toll canal. They purchased land while other parcels were taken by eminent domain and sold shares at $100 per unit. They brought Italian workers to the Cape by the hundreds. But, for ten years, the project stalled. Enter August Belmont.

In 1904, Belmont bought them out at a much depressed price per share and began to build a team that could get this project moving again. Belmont’s lineage is rich with people who changed the course of politics, policies, and commerce on an international level. His maternal grandfather was none other than Commodore Matthew Perry who sailed into Tokyo Harbor and demanded the Emperor to “open your ports.”

Belmont knew that the construction of the canal needed engineering on a scale equal to that which was taking place in Panama. So when William Parsons, a civil engineer with an impeccable resume who had been part of the engineering team in Panama became available, Belmont brought him on-board the Cape Cod Canal project. From 1905 until 1914, the canal was designed and built. At times, crews worked 12-hour days with only two days off per year. There was heavy equipment, boulders to be moved or exploded both above ground and underwater, special rail cars to remove dirt from the site, and ships to ferry dirt away to designated dumping locations. It was a Herculean undertaking. Belmont was determined to stay the course “until the last shovel” full of dirt was removed with a goal of opening up his canal before the completion of the Panama Canal. They succeeded with a mere 17 days to spare.

Hamlin saw it all. She wrote, “We had gone over to see the work at various stages during the intervening years and General Charles Taylor of Buzzards Bay had been most kind in showing the progress to us every summer when we went over to luncheon with him and Mrs. Taylor.” (Taylor’s Point is now the location of Mass Maritime Academy). Further on she recorded, “…the Scussett and Manumet Rivers had to be changed entirely in their courses as they were small and crooked streams. Manumet in Indian means “the trail of the burden carrier”. Hamlin describes two beautiful highway bridges that in later years would be closed to traffic for security reasons when ships carrying supplies to Camp Edwards sailed through.

Mendell told us that before the canal was cut through, the first two bridges were built roughly where they are located today to ensure that movement back and forth from the Cape would remain unimpeded. He said they were ‘dry built’ with no water passing under them at first.

On the grand opening day of July 4, 1914, Hamlin described a flotilla of ships and boats that gathered in New Bedford. The plan was to sail through the canal from Buzzards Bay into Cape Cod Bay, turn around, and dock at Taylor’s Point for a grand opening ceremony. Many dignitaries, politicians and the like were making the trip and were on the agenda to speak at this ceremonial opening.

Hamlin wrote, “Assistant Secretary of the Navy Roosevelt invited us to go with him on a U.S. torpedo boat the Destroyer from New Bedford. Anna and I accepted but Charlie had promised to go in the Rose Standish with the State officials and speakers.” As Mendell explained, the Rose Standish was a passenger carrier, a 993-gross ton steel-hulled paddle steamship, designed for calm waters.

At 9:00 am, Hamlin was in New Bedford on the Destroyer and watched as Belmont’s personal vessel, the Scout, headed the parade of ships from the harbor. “It was a lovely sight on a lovely day” with no shadow cast on the day from “the far away murder of the Austrian Arch Duke in a place called Sarajevo … We knew and cared little about these European imbroglios…”

She then describes a strong northeasterly wind, believing it to be the worst thing for the navigation of vessels at this location along with water height differences and tidal shifts between the two bays, “…Buzzards Bay was rising while Massachusetts Bay was falling…” It became a very choppy mess to get through.

“It was with great difficulty that the ships turned about in the Bay to return through the canal to Bourne … The Standish was overloaded with people and it looked as if that excursion boat would tip over … our Destroyer let the Standish get far ahead as the tide was rushing hard with the wind to push it and our ship was a much faster one but the poor Standish was rushed past the wharf at Bourne where a great crowd in an enormous tent waited for the speakers. The Standish had to run down the five mile channel before she could turn in Buzzards Bay and bring back the speakers…it took two hours for this extra performance.”

All was well that ended well, and Belmont’s canal made him money as a toll waterway. The first year, an estimated 2,000 vessels went through, with double that the following year.

However, in 1918, citing security reasons after a German boat came dangerously close to Nauset Beach, President Wilson ordered that the Federal Railroad Administration take over operation of the canal. After WWI, Belmont with great hesitation resumed responsibility of the canal while concurrently negotiating with the government to sell it to them. Finally, in 1927, a deal was made for which Belmont received $11.5 million, probably $5 million less than he originally invested, as Mendell speculates. Once the U. S. Army Corps of Engineers had control of the canal, it made improvements, reconstructing and modifying the location of this glorious and massive waterway.

As for Hamlin, Mendell told us she was an extraordinary woman. She, too, was a visionary. She spearheaded an organization known as the Mattapoisett Improvement League, which aided in opening public spaces in Mattapoisett – notably Shipyard Park – municipal trash collection, town beach, and tree plantings. She was also a published author (as was her mother), and wrote An Albany Girlhood that is still available. I found it on Amazon! Now wouldn’t that thrill her? Mendell’s elder family members were also contemporaries of Hamlin, and he recalls that all felt she was an exceptional person whose talents benefited the beautification of Mattapoisett.

Some of her personal papers are resting in the Mattapoisett Historical Society Museum, which is presently in the process of cataloging its vast collection into 21st century style computerized records. The museum’s summer program includes additional events featuring Mendell: walking tours on August 2 and 16 (stepping off from the museum at 2:00 pm) and a lecture on local mover and shaker Joseph Meigs on August 31 at 5:00 pm in Shipyard Park. All events are free, but donations appreciated.

So the next time you look at the Cape Cod Canal, think of that day long ago when Mrs. Charles “Bertie” Hamlin witnessed its opening while chatting with Franklin Delano Roosevelt. I think she would like to be remembered in part as an eyewitness to history. 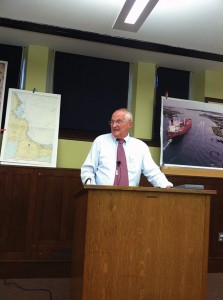