This morning, just now, the chorus of bird song rose above the sound of vehicles passing by the house, that steady stream of business on the way to conduct itself, its self-imposed importance and urgency pushing forward, stock-holder values must be preserved, and nothing else matters, except the birds’ song and its soothing quality – a balm, a tonic against pain, a moment of respite, a form of prayer.

Today will have a trajectory and I, mere mortal that I am, will presume I have some control. I will allow myself to believe that and smile at the oncoming faces. I will fake it till I make it and hear the birds throughout it all.

It’s important to pace oneself when staring down a long, dark rabbit hole wondering if it has a bottom, and once there will the way back up be lighted or impossible to find. At times like these, faith would help, but in my case I’ll draw on the collective wisdom from all who have passed before me. They will remind me – this, too, shall pass.

The Hindu belief system allows that staying perfectly still and just being present is sufficient to one’s survival and if the worst outcome should inevitably befall one, well, one’s oneness with the universe remains the goal. A little of that will go a long way with me today, but I’ll still worry, fret and probably lose a pound or two from being unable to swallow.

From my own experiences, I know without a shadow of a doubt that most problems will resolve and most outcomes will be acceptable and upon looking back, I’ll be reminded that anticipating the future was much more difficult than simply letting it happen. So, in this, the ability to “just be” could have helped. But not right now.

Right now, I struggle with the problems. I want to get my hands in there and fix everything, make it better, heal the sick and pay the debt. I want to be the righter of wrongs with the power of a goddess coupled with a bit of Wonder Woman. I want too much and will have to take what is given even should it be a bitter pill. I’ll be a grown up as mandated. I won’t show fear.

As a decisive person by nature, situations that have not drawn to a conclusion are quite unsettling. I want tomorrow today so I can know what the ending of the story is. I want to write the ending really and have it come out my way. I want control. The universe laughs. Who has control really? Isn’t it all random chaos? Oh, ego, how you fool the foolish.

By tonight, these thoughts will be no more, replaced by the day’s events as the future becomes the past and whatever will happen has happened and I get to process the results. Tonight, I’ll be that reporter in the back of the room silently observing and recording to the best of my ability other people’s realities and/or that grandmother in the concert hall proudly beaming at the younger generation, one I cannot protect against the future nor take the cup away.

Anxiety is an old coat well worn and full of holes, a patchwork of inherited visceral responses that is too big and too heavy to carry without help. So I’ll walk off as much nervous energy as possible and smile though my heart could be broken, but it isn’t right now so I’ll just carry on. What else can one do?

I’ve heard too many times some version of “we only get what we can carry.” That is crap for someone of as little faith as I own – yet I want to believe that so I shall stand straight, I will be brave, everything will be alright.

He said, “Give me courage.” Those were the most heart-rendering words Dad ever spoke and these spoken as he lay in a hospital bed, eyes closed, brain damaged, unable to discern day from night or reality from dream. That was his response to, “Dad, can I get you something?”

Please send me some courage.

P.S. Dad, if you are in heaven, can you get me something? Please ask God to help us. 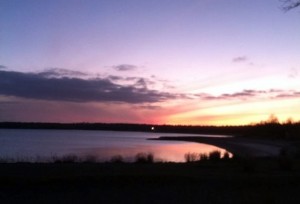 One Response to “Ground Control”