You are here: Home » Features » Grange Fair Celebrates an Agricultural Past

They were the lucky ones, considering the displays in front of them. Brightly colored flowers decorated the small stage. Mouthwatering vegetables covered tables and filled old Radio Flyers. Spread out along the edges of the room, handmade quilts, knitted blankets, and local paintings perched on folding tables.

“The National Grange itself was started after the Civil War,” explained Grange Secretary Susan Lafleur, referring to the national organizing body which runs all town grange halls. “It was originally for farmers. It was meant to be an aid to them.”

As the Massachusetts State Grange website explains, The Grange is meant “to unite private citizens in improving the economic and social position of the nation’s farm population.”

In the earliest days of the fair, Lafleur explained, every aspect of agriculture was celebrated at Rochester’s Grange Fair. Livestock would have been judged and prizes handed out. Matched pairs of draft horses would pull logs, sweating and blowing under a late-summer sun. Today, the livestock can’t be shown; state mandates and restrictions have forbidden a large part of the fair.

Nevertheless, the other half of the fair remains traditional. It’s fascinating to find such a historical style of fair, conducted in much of the same fashion as it would have been in 1910.

In the Rochester Grange, dusty afternoon sunlight peered through the tall windows of the hall. It spilled onto wooden boards worn down by a century’s worth of footsteps. Several different categories of local wares were judged, including plated and canned vegetables, baked goods, photographs, floral arrangements, and cut flowers. Some of the baked goods were offered for sale; chocolate chip brownies and muffins, cranberry bread and banana bread all proved too tempting to resist.

The judged categories gave an indication as to what was important to a truly agricultural town in the past.

When the fair began in the early twentieth century, farmers were looking for a source of extra support. Living in a small farming-centered town, an agricultural fair was as much a social occasion as it was a friendly competition.

Winning a prize also meant winning a few dollars, which would have gone a long way. Those traditional monetary prizes are still available today; a vegetable display will earn $6 to the winner, $5 to second place, and $4 to third place. Individual presentations of the other categories net $4 for the winner, $3 for the runner-up, and $2 to third place. Even today, a handy green thumb or local artist could walk away with a handful of cash. Ribbons were awarded by the Rochester Grange.

Purple ribbons also fluttered on several displays. These ribbons were bestowed by the Massachusetts Grange, which still aids in the running of local agricultural fairs to this day. There are still several agricultural fairs nearby. Lafleur noted that the Middleborough Grange Fair will be held on Saturday, August 27.

Displays at the fair change with the year and with participation from the town and local areas.

“Every year is different,” said Lafleur. “Last year, we had enough flowers to fill the room; this year there’s not so many. It’s the same with the vegetables, although I don’t know if the season was great for them overall. We have more crafts than we did, more photography. We had a number of new people this year, which was good,” she added. “We always encourage that.” 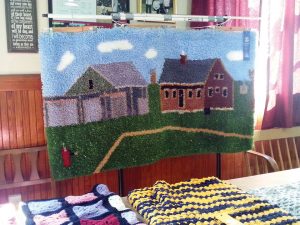 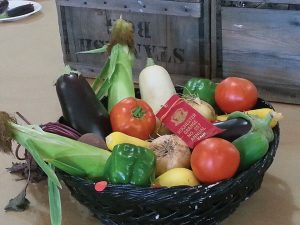 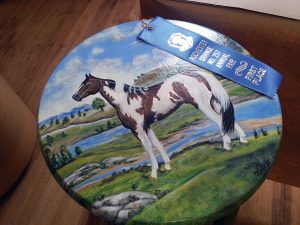 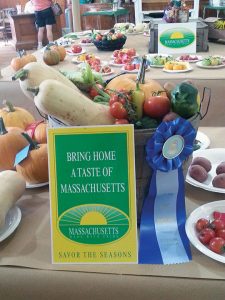 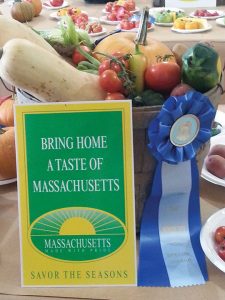 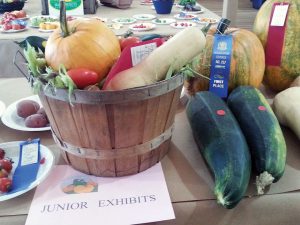