For many years, a stone cottage has stood overlooking Snipatuit Pond in Rochester, a picture perfect setting of peace and tranquility, holding within it more memories than there are fieldstones that make up the rustic walls of this historic Neck Road fairy tale cottage.

Built in 1925 by Dr. George Moore of Brockton, Massachusetts, the little cottage over time gradually fell into a state of decline and was likely sitting in wait for someone to purchase the five and a half-acre lot and knock it down to make way for a more modern dwelling.

Meanwhile, for four years, a family residing in the U.S. Virgin Islands was searching for the perfect second home in Massachusetts. A Massachusetts native, Andrea King said she wanted to buy a second home so she, her husband Skip, and daughter Grace could be closer to King’s relatives who still live in the state.

King treated the Rochester Historical Society and its guests to a slide presentation on September 17 that documented the restoration project from start to finish. Even some neighbors who used to know the original owner were present and shared their own information and insights into the history of the house.

King’s endeavor began in 2011, when the Kings found their perfect home in a very imperfect state of existence; however, when King saw it listed for sale on a real estate website one night around midnight, she dreamed a dream of restoring the cottage to its original state and made an offer on the property – without ever seeing it in person.

Before long, the family flew in to meet “Sweetheart Cottage” for the first time, a name King’s daughter Grace, then six years old, came up with.

“It looks rat-eaten,” King recalled saying upon seeing the cottage for the first time. Her sister wondered, though, “Don’t you see the potential there?”

King’s husband asked her, “Are you out of your mind?” King said she always wanted to restore an old home and this time she took a risk at fulfilling that goal.

It was pretty bad, said King. There was evidence of critters living within the vacant house that was still stuffed with the belongings of its previous owner, the late Constance Porter, one of Dr. Moore’s five children.

For the duration of the restoration, the Kings bought a trailer and hooked it up to the new septic system installed on the property when renovations began in October 2011.

Much of the slate roof was in disrepair, but the chimney was still intact, and King had a vision of making the cottage her family’s home.

“You had to use your imagination,” said King. She contracted an Irish slate roofer to salvage the “Munson black slate” roof and restore it to its original condition, and she also found refurbished factory wood floors to replace the old dance hall floors originally installed in the house.

“What in the world are we going to do with this place?” King said the family wondered about the bare-bones kitchen.

The front room was the only area of the house that was insulated, plumbing had to be installed, and some additions were added to the house as well, including converting the three-season room into an all-season space. The house – originally 1,350 square feet – was now up to about 2,200 square feet.

King said she got a lot of “you should” advice from others, saying, “You have to kind of decide … and obviously I didn’t agree with most of it.” King was set on restoring the house to as close to its original condition as possible, keeping the stone interior walls and the chimney, as well as some of the original furniture left behind by the previous owner.

Her mantra throughout the project: “Recycle and rebuild!”

She had the design carefully mimic the original front of the house when building the addition to the rear of the house, finished off the chimney with a chimney cap typical of Scottish cottages like Sweetheart Cottage, and added a stunning copper trim to the exterior.

King added other personal touches along the way, like lighting fixtures to the enchanting niches built into the interior stonewall. King also insisted on saving the windows.

“My philosophy is, if these windows have been here for 89 years…” said King. “The windows are hard as a rock … very strong wood.”

King said she fawned over the hand-hewn posts and beams, and salvaged the hearth located in the small basement of the house.

As the Kings discovered the different areas of the cottage, they found more and more intriguing and fascinating aspects to the house, including chalk writings left from the children years ago.

“There was a lot of graffiti in there,” said King. She found names written with chalk on the beams and found it added more character to the cottage.

The project took three years to complete, a bit longer than the Kings anticipated, and the lawn is finally seeded with grass, one of the finishing touches to the project.

“It really is a gem,” said King. “It’s hard to find these amazing houses … you just don’t find them like that anymore.”

What is most gratifying to King was the ability to keep the original building and to find an architect who could be true to the original design, understand her vision, “and to bring those two things together in such a way to create a beautiful home that is larger than the original and just what we wanted.”

King said her daughter is happy with the end result, and King’s family is looking forward to sailing on Snipatuit Pond and being a part of Rochester.

“[Grace] loves the property, playing on the pond, catching toads, looking at all the wildlife we have on our property,” said King. “She loves it in Rochester, as do her Mom and Dad.” 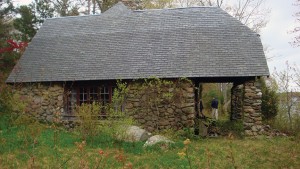 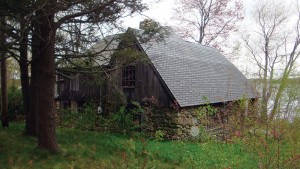 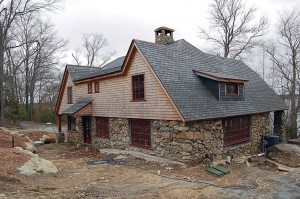 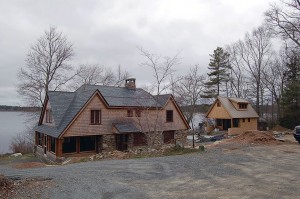 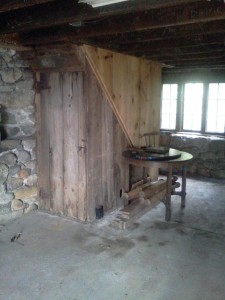 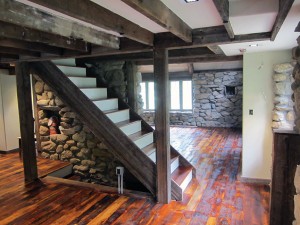