If you thought Massachusetts was left without any teams in March Madness when Arizona beat Harvard in the NCAA Men’s Basketball Tournament, you were way off.

After strong showings at the Destination Imagination Cape Cod Regional Tournament on March 13, eight teams from Rochester Memorial School advance to the Worcester Polytechnic Institute this weekend for the statewide competition. Other teams from the Tri-Town participated, as well, but RMS represents the most formidable contingent.

Destination Imagination, incorporated in 1999, is a New Jersey-based nonprofit organization with international reach. Its mission is to teach students from kindergarten to college three skills: creativity, teamwork and problem-solving. Massachusetts ranks fourth in the United States in participation with upward of 800 teams, only 60 of which have qualified for this weekend’s competition.

“It’s an amazing thing for me to be a part of, but really just to witness, because the work is all the kids’,” Rood said. “As manager, you are there as the adult, the one in charge, and to help your teams with some of the skills, in general. But you cannot help them with the challenges: They have to come up with everything about those themselves. You are there to corral.”

The challenges Rood references change annually for Destination Imagination, and they fall into the following categories: Science, Structural, Improvisational, Fine Arts, Service Learning and Early Learning. In addition, each presentation must tell a story that includes a beginning, middle and end.

“They all tie back into core curriculum, while incorporating each other,” Rood said. “Obviously, experiential learning is a big part of this.”

The sixth-grade team is a veteran-laden squad and has competed together for four years. They are considered a favorite this weekend, and have already won a Renaissance Award for their exceptional performance.

“Our whole team, we’ve all been friends throughout the whole thing,” said sixth-grader Brett Rood, Tina’s son. “We’ve grown as a team and worked as a team, and every year we’ve spent our vacations working on this, and we have fun. It’s about learning, but it doesn’t feel like it. ”

“This is my first year doing it, and to watch these kids with different backgrounds and abilities transform into a cohesive group that works together, to see their communication skills develop in a just a few months, it’s just such a positive thing,” she said. “In the competition, everyone supports everyone else.”

Kulak added that this attitude starts at the top with Rood.

“Without Tina, there would be no Destination Imagination at this school. She’s the driving force. She’s the leader.”

For her part, Rood said she is looking forward to the atmosphere at WPI’s Harrington Auditorium this weekend. The event is open to the public.

“It’s a celebration of all of the work that has been done during the season,” she said.

As for the students?

Said one team in unison: “The food!”

“The buffet,” Rood laughed, “is always a big hit.” 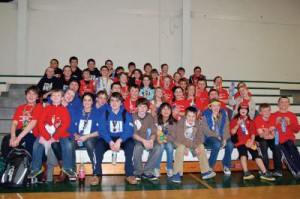