You are here: Home » Features » Dancing in the Street at the Marion Town Party

August 25 dawned with clear blue skies and temperatures pleasingly in the mid-70’s, weather that was picture perfect for a Marion tradition – the annual Town Party.

No one knows exactly when the first town party was held. When asked, the most common response was, “Gosh I don’t know, it was around when I was a kid,” regardless of the current age of the respondent.

Steve Gonsalves, one of the party organizers, said it started at least as far back as the turn of the last century and may have been started by President Grover Cleveland’s wife. He said that somewhere along the way, the VFW Benjamin D. Cushing Post 2425 organized the party until that organization could no longer handle the massive function. Now a partnership of private citizens, municipal employees, and local businesses join together to keep the event going.

Old documents on display at the party included the 1914 Town Party booklet stating the party was held in honor of the Marion Visiting Nurse Association whose motto was, “An unchanging purpose in a changing world.” Prophetic words in today’s changing world.

A booklet from 1982 honored the veterans and the VFW post.

This year’s event carries on traditions such as food and music while adding modern twists like inflatable games for the children.

“There are lots of free activities for the kids and free popcorn and cotton candy,” said Donna Hemphill, a well-known municipal employee and one of the organizers hard at work on the day of the party, doing everything from decorating tables to sourcing Band-Aids.

Sponsoring the event were some 40 local businesses and private donations whose support was listed in the town party booklet.

As tiny tots lined up to play on the inflatable games, older children enjoyed crawling up the rock wall set-up in the middle of Spring Street.

A DJ played music sure to please all ages and several not-so-shy ladies were grooving in front of the Town House appearing not to have a care in the world, just the lovely summer breezes and good music. Later in the evening a trio provided life entertainment.

Marion’s retired fire truck from the 1950s was used to give folks a leisurely drive about the village streets, clanging its bell along the way.

Speaking of fire apparatuses, new this year was retired New Bedford Fire Chief Roger Nadeau’s Engine 266 that was on full display. Nadeau said that he acquired the fire truck for the purpose of converting it into a traveling memorial honoring fallen veterans and firefighters, as well as a hearse.

Nadeau demonstrated two pullout display units built into the sides of the truck, one is a memorial to Father Mychal Judge, a causality of the 9-11 attack in New York City. Judge was the fire department chaplain for one of the responding units that day. The other display honors Vietnam veterans with a diorama depicting a battlefield. But the over-arching reason Nadeau undertook the challenge of building a traveling memorial was to make it available as a hearse to carry fallen firefighters to their final resting place.

Back over at the food pavilion, throughout the day, a revolving group of grill masters pleased the hungry party-goers with hot dogs, hamburgers, and chicken kabobs.

But as the sun went down and the sherbet colored moon rose over Sippican Harbor, anticipation ramped up for the closing ceremony – the lighting of the bonfire. Memories made, good times were had, children played, all were glad. And if you are the type that likes to plan ahead, way ahead, the 2019 Marion Town Party is planned for August 24. 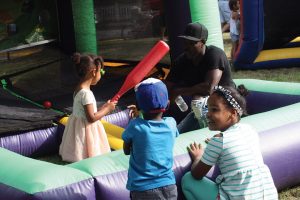 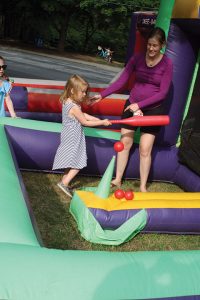 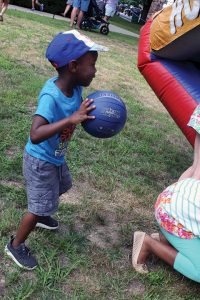