You are here: Home » Features » Cultivating the Creative Habit

For as long as he can remember, Peter Mello has been taking pictures. From the age of eight, when his dad gave him his first camera, he has been looking through the lens and seeing the world as a photograph.

On Wednesday night at the Mattapoisett Historical Society Museum, Mello shared the thoughts and philosophy driving the creative habit behind the images he has spent his entire life capturing.

In his professional life, Mello is the managing director and co-CEO of WaterFire in Providence, an art installation running through the heart of the city in the Woonasquatucket River. Mello says he has a hard time describing what he does and quoted one of his favorite photographers, Elliott Erwitt, who said, “The whole point of taking pictures is so that you don’t have to explain things with words.”

In chronicling the history of WaterFire in pictures over the last 23 years, Mello has tried to convey the ambiance as well as the determination and effort of the event.

In many of the photographer’s WaterFire images, the subject is blurred with almost a mystical quality. Mello takes a photograph at the beginning of every WaterFire lighting and says, “As a photographer, we have a habit of trying to capture the perfect image.”

For Mello, however, the subject is more important than the clarity of the image. He referred to Henri Cartier-Bresson’s “decisive moment,” the attempt to capture the balanced and definitive moment in a photograph.

Mello uses a cadre of volunteer photographers to shoot the event as well in an effort to capture photos that evoke the emotion and impact of the installation.

In his talk entitled “Chasing Light, Capturing Time and Other Creative Habits,” Mello underscored the importance of always carrying a camera.

In the 1980s, Mello lived in New York City and did “run and gun street photography,” capturing a bygone era of the city, like so many other street photographers before him. Now shooting many images with his iPhone as well, Mello described some of his personal projects.

The phrase “Creative Habit,” which Mello attributes to the book title of choreographer and dancer Twyla Tharp, exemplifies Mello’s approach to his projects. The common thread among the projects is his deep relationship to his surroundings.

“I feel like I see photography – I see photos everywhere I look,” he said.

This personal connection to his photos is embodied in his effort to capture the subtle fluctuations in the sunrise over Ned’s Point or the almost imperceptible variations from day to day of the mornings in Shipyard Park. As understated as those changes may be, Mello captures them, amassing 2,500 photos of mornings on Shipyard Park, for example – photos that illustrate the daily life in a small town.

Mello’s photographs in “Mattapoisett Noir” shot with his iPhone provide a lens into an afterhours world seen through the eyes of an artist.

Cameras pick up what you can’t see, Mello says, and with the nighttime images of Mattapoisett, editing can be important to assure that the photograph reflects what the photographer saw through the lens. The photos, which can be seen on Mello’s Instagram page, depict “a dark, grainy noire space, free of people.”

Mello quoted Dorothea Lange who said, “Pick a theme and work it to exhaustion…” in describing his passion for photographing his subjects. However, he does not consider himself a portrait photographer, as illustrated by a disastrous attempt at wedding photography when he brought a diaper bag rather than his camera to the wedding.

One of Mello’s favorite subjects is photographing his two kids, Luke and Joy, describing the process as “watching them grown up, capturing the progression through his photographs.

“All my photos are personal,” said Mello, later adding, “[They] happen because I want to challenge myself.”

Mello is working on a new project in which he shoots a 60-second video every day and posts it on Instagram. Chronicling the vicissitudes of life appears to be Mello’s calling, and in his hands the ordinary is elevated to art. 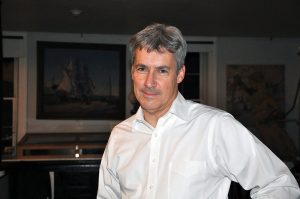