On October 17, with the first real chill of the fall season testing the hale and hearty, about 100 people gathered around a giant elm tree in Dunseith Garden in Mattapoisett to learn how to control the dreaded winter moth.

Winter moths arrived in the area several years ago, drifting steadily south from northern regions in the 1990s but not definitively identified until 2003.

By that time, these hungry pests had established a reasonably strong foothold, or should I say wing-hold, on our beloved hardwood trees.

The spring of 2015 was particularly difficult to witness as vast acreages of trees were shredded beyond recognition – no longer lush green woodlands and well-groomed landscapes, but tree skeletons barren of leaves.

“These moths are opportunistic,” said Deb Smiley of the Mattapoisett Tree Committee. Smiley explained that after successive seasons of moth damage, a normal healthy tree would die. She said moths used various strategies to secure food, including hitching a ride on cars and flying through the air on invisible threads.

While Smiley gave the lowdown on the life cycle of the winter moth and how to combat the nasty critters, members of the Tree Committee, along with Tree Warden Roland Cote, demonstrated how to ‘band’ a tree trunk.

Smiley began by telling the eager listeners that trees that have suffered damage from moths will try to re-foliate, but, left to do so without human intervention, the weakened tree could sustain permanent damage.

Her advice was to fertilize trees in the fall and water them in the spring at the roots. Smiley said there were several types of deep probe watering devices that delivered water directly to the trees roots. She disabused the crowd of the notion that tree roots were deep underground, saying, “Roots are about three feet deep, so you don’t have to go too far down.”

“They won’t know what to do with the food,” she said.

As for measures everyone should be taking now to cut off the moth’s lifecycle, Smiley gave the checklist.

First, the trees have to be banded. The best practice for adequately placing a barrier around a tree trunk is to use quilt batting, a product readily available in craft and fabric shops. A thick wide strip of approximately 6 inches is placed around the trunk at about 5 feet above ground level.

Second, clear plastic wrap is placed over the batting to keep it secured and tightly snuggled to the tree trunk.

The moths can easily slip under and along the uneven surfaces of trees; therefore, additional batting material needs to be compacted under the plastic wrap and into those gaps to create a complete physical barrier. Additional plastic wrap at the bottom and top of the banded area will help to keep the barrier in place through the weeks it is needed.

Third and most importantly, a substance needs to be applied to the surface of the plastic wrap, a substance that will trap the moths as they attempt to climb into the tree’s canopy.

There is one popular commercial product Smiley recommended called Tanglefoot. You may also use petroleum jelly or similar sticky substances.

Finally, after placing the barrier around the tree, you’ll need to spray the trunks from ground level to the bottom of the band with a dormant oil product sold at gardening centers. This helps to destroy the advancing enemy as they awaken from their underground lair.

Sandy Hering, another knowledgeable member of the Tree Committee, said more information was available on the Tree Committee’s webpage at www.mattapoisett.net as well as their Facebook page, and from the University of Massachusetts webpage, www.ag.umass.edu. 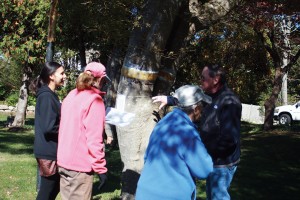 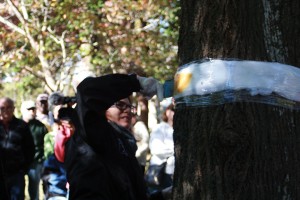 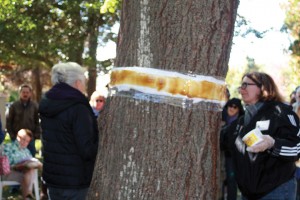