You are here: Home » Features » Checking Out the Library’s New Telescope

Attention, aspiring astronomers! Did you know that the Mattapoisett Free Public Library has a telescope you can ‘check out’ to ‘check out’ the night sky from your own backyard?

Library Director Susan Pizzolato learned about the Adopt-a-Library telescope program, which provides compact yet powerful Orion telescopes to libraries at an affordable price, at last year’s Massachusetts Library Association conference, and the Friends of the Mattapoisett Library purchased one for the library.

“I know the Plumb Library in Rochester already has one through the program called Cornerstones of Science,” Pizzolato said. “The Aldrich Astronomical Society makes these telescopes available to libraries…. [They] purchased the telescope on our behalf and adapted it to make it more user-friendly.”

On Tuesday night, the library held a program to introduce patrons young and old to the new telescope.

John Root, coordinator of the Adopt-a-Library program, covered the basics of how to use it, while Jim Zebrowski, current president of the Aldrich Astronomical Society and “Solar System Ambassador,” built up enthusiasm for what you can see with it.

The telescope may be compact – it only weighs 14 pounds – but it packs a punch.

The telescope comes with two eyepieces, but the Aldrich Astrological Society had them replaced with a single variable-power eyepiece to make it easier to use – and harder to damage.

When you check out the telescope, it is packed in a plastic tote along with a copy of the National Audubon Society Field Guide to the Night Sky and an instruction manual, which Zebrowski recommends reading ahead of time so that you don’t find yourself in your backyard, in the dark, trying to figure out how to use it.

Not that using it sounds terribly complicated. You switch on the “EZ finder,” which helps you locate what you want to look at – Saturn, for example – which you would then look at through the eyepiece. Everything is clearly labeled, and everything is tethered or Velcro-ed in place.

The Aldrich Astrological Society also donated a copy of The Total Skywatcher’s Manual to the library.

“The goal (of the telescope) is really for people not to be intimidated by astronomy,” Pizzolato said. “Because it’s very easy, it’s pretty simple to have a ‘wow’ moment.”

Down the road, Pizzolato plans to offer more library programs and bring in some astronomers to keep library patrons interested.

Mattapoisett residents with an adult library card can check the telescope out of the library for one week. 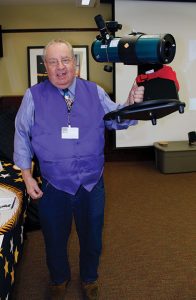 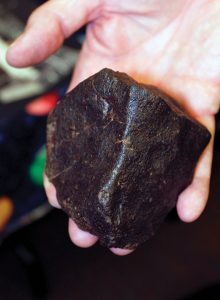