On Tuesday, September 25, demolition of the Mattapoisett water tower on North Street began. The tower supplied water to the town for almost 100 years, but was decommissioned when the newer system near Industrial Drive was completed in 2011.

A century earlier, the Town of Mattapoisett had voted to create a committee to “take action in regard to a water supply,” according to the Town Report from 1911. On December 12, 1912, the town signed a contract with Hanscom Construction Company for a project that included erecting the 90-foot tall, 330,000-gallon tower on North Street. In addition, hundreds of feet of pipe were laid down on Depot Street and Randall Road, and almost 60 hydrants were installed. The total cost of the project came in at just over $68,000 and the tower began delivering water to the town on June 15, 1913.

The demolition of the tower was scheduled to be complete by the end of this week. Here are two photos of the tower, one from 1913 and the other from September 25, 2012. 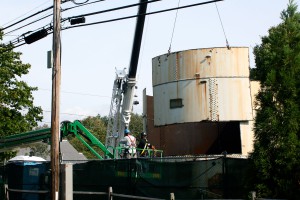