Every school needs a mascot, and at RMS it’s always been that rascally raccoon, Bandit. A loyal and constant fixture at the school, wherever Bandit shows his face – whether on posters, banners, T-shirts, or even socks – the school is reminded in small ways of how much they love their little mascot.

But that all changed on Friday – sort of.

World famous chainsaw artist and star of the National Geographic Channel TV show American Chainsaw, “The Machine” Jesse Green presented the students of RMS with a one-of-a-kind wooden chainsaw sculpture – much like the sculptures he has done for the Patriots, WWE, national universities, the Husqvarna company, and even the princess of Jordan.

Green was commissioned to create the sculpture by the RMS PTO Cultural Committee, an idea brought forward by PTO member Kara Brown who thought, not only would her former college classmate create something wonderful to leave behind for the students, but he’d also leave behind an important message – imagine it, believe it, do it.

Born in Massachusetts in 1976, becoming a famous chainsaw artist wasn’t something Green simply stumbled onto; he had to carve his dreams into reality with his chainsaw.

Green worked a lot of jobs he didn’t like along the way. He attended the UMass Dartmouth art program and explored his talents, but it wasn’t until 1997 when he picked up a chainsaw for the first time.

“It was love at first cut.”

Following his introduction, when Green had the students close their eyes and clearly imagine something awesome they want in their lives, he then led them on a fast-paced journey across the experiences of his life. And he had zero problems keeping the kids engaged with his quick wit and even quicker finger tap of the photos in his slideshow.

Green confessed, “I really wanted to be a famous artist like Pablo Picasso … and Bob Ross.”

He wanted to build ‘big’ stuff – big like Mount Rushmore, the sphinxes of Egypt, and the Moai heads of Easter Island. Meanwhile, the images of almost everything Green made reference to flew across the projector wall as fast as Green could say the words.

Green recounted all the trials and errors, all the fails and pitfalls he fell into along the way that he never gave into. He would always climb out towards another opportunity, fail again, try again, fail again, still holding tightly to his dream.

After a pretty good run at driving tractor-trailers across the country, Jesse still hadn’t found what he was looking for, and it was his wife who eventually gave Green the nudge he needed to keep going.

“I believe in you,” she said to him. “Just go, just walk away, and go follow your dreams,” said Green.

He joined a traveling lumberjack show, carved out his name, and as he put it, he couldn’t believe how awesome it was. He was going places, literally and figuratively.

He also formed the band he always wanted to be in – Fevah Dream. They rocked and toured the country and for a 25-year-old, life was indeed good.

“I got to see the whole country,” Green said. “I was in show business. It was amazing.”

And he was chain-sawing out sculptures, and people were buying them! His work was being recognized all over and before long, the right people would notice him and his career would emerge like a form from one of his blocks of wood.

Then one day out of the blue, an associate from Green’s past contacted him saying he wanted to make a TV show together. They pitched their idea for five long, frustrating years. Green would keep on doing with his chainsaw what he was doing, and all the while he was sharing it on social media, which is exactly where the right person discovered him. It led him eventually to a contract with the National Geographic Channel for a $2 million show about him and his chainsaw.

“A whole new day was dawning,” said Green. And really, does he need to describe how it felt to see his own TV show featured on the Comcast On-Demand menu listed between It’s Always Sunny in Philadelphia and American Chopper? (It really happened. He had the photo to prove it).

Green still revels in the fulfillment of that dream, and now he enjoys his other dreams of raising his children and continuing to make art.

For almost an hour Green had those kids in stitches, every time he made a play on words, punned, or made ironic jokes accompanied by equally ironic and hilarious photos. But before it was over, things quieted down as Green left the kids with something to contemplate.

“No. You live in Rochester, Massachusetts, in the United States of America, and you have the ability to choose your own path … I want you to be thankful for that.”

Then it was back to that image he had the kids visualize so intently at the beginning of the show.

“I’ll tell you right now how to get it, the key to success is to visualize success,” said Green. “Whatever you want, you have the power to get it. You can make your own victory, you can choose.

“So dream big, figure out what it is you want, create your goals, and follow your dreams, kids.”

It might be hard. Sometimes it might feel like you’re blindfolded and stumbling through it all. “You’re going to hear ‘no,’” he told them, “…But don’t be afraid to fail.

“Believe in yourself, you never know where you might go.”

The kids exploded into applause for Green, but they went wild when he and Principal Derek Medeiros uncovered Bandit and beheld the masterpiece.

Before the kids had the chance to touch Bandit and get an autograph from The Machine, Medeiros told them, “The message is, think about what you want … and if you work really hard, you can do it.”

*See a video of the moment Bandit was unveiled on The Wanderer Facebook page. 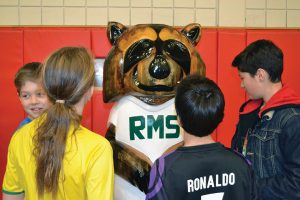 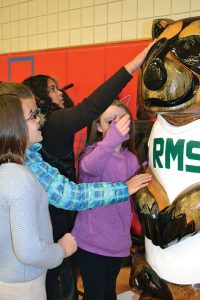 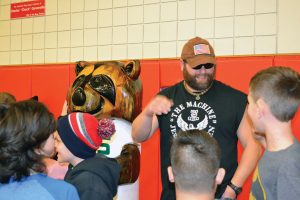