Summertime on Cape Cod means the arrival of hundreds of the nation’s best college baseball players to the region competing against each other to earn the recognition of the top scouts and coaches in Major League Baseball. The Cape Cod Baseball League, for over 100 years, has been the preeminent summer baseball league for college players in the United States.

There’s no doubting the busy schedule for the players, as they hit the field playing and practicing everyday. Despite the demanding hours, however, they still take the time to reach out to the community. On Tuesday, June 26, four members of the Wareham Gatemen stopped by the Mattapoisett Free Public Library to read to dozens of local children.

“It’s been fun to give back to the community,” said Dustin DeMuth, and infielder from Indiana University. “I remember when I was little and looking up to people, too. It’s good to get out and mingle with the kids.”

“I think it’s really good when they come out here and see us and meet us and we can give them autographs,” said Chapman. “It gives them something to look up to. I looked up to my father and grandfather since they both played baseball too. I also remember players coming to the library to read to us during elementary school.”

The players then took the children outside and showed them some pointers on throwing and catching baseballs. The children relished in the moment, playing baseball with players who could potentially play in the major leagues someday. The Cape League is one of the best learning tools for baseball players.

“I like to play against all the other players,” said Chapman. “I play for a Division II school, so I like to see if I can go against the best of the best. It’s really fun, I’m glad I’m here.”

When the players aren’t busy on the field or helping out in the community, they are still trying to make the most of their summer by partaking in normal summer activities.

“It’s been awesome, the weather has been great,” said Kuntz. “This is the best place to be.  The beaches are really nice, and when it’s 75 degrees out, anything is fun. I like going through the Cape and checking everything out.” 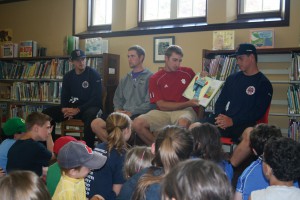