Across the nation, housing markets are still stifled from the collapse in 2008.  Growth remains slow but prices were up 3.6% in the third quarter from one year ago, according to Standard & Poor.

In the last few months, Mattapoisett has seen a significant increase in local residential real estate development.  The number of qualified home sales skyrocketed in the third quarter and construction of new homes is on the rise.

“It generally speaks to a strong economic situation.  It can only be good for the town,” said Mattapoisett assessor Kathy Costello.  “In the first quarter of 2012, there were six qualified sales.  In the second quarter there were seven.  But we had 19 sales in the third quarter.”

Sales information for the fourth quarter is not available until January of 2013.

Strong home sales can often affect the assessed tax rate of the town, in same cases decreasing the town rate.  But due to the budgets that were voted into effect at the Annual Town Meeting, Mattapoisett’s assessed tax rate has increased from $11.85 to $12.28 for FY13.

“It went up because the levy went up.  The levy is what the town needs to pay for,” said Costello, who added that the Assessor’s Office is always open to the public for questions and information on how the town assesses tax rates.

That is not to say that Mattapoisett wouldn’t see a decrease in the tax rate for FY2014, but according to Costello, it is too early to know what rates will look like that that far down the road.

New home construction in the town has been moderately strong all year.  Seventeen new homes were approved between January 1 and November 30.  According to the Building Department, 10 more applications were filed in December alone, for a total of 27 new homes in 2012.

“For a small town with little land for development, this is big,” said Building Commissioner Andrew Bobola.  He said the beginning of the year was poised to start off well if a new subdivision is approved for land off Deerfield Road.

“I think this could have a direct effect on the tax situation,” he said.

“We’re lucky here because the town really knows how to prepare for a rainy day.  Some communities haven’t prepared financially the way Mattapoisett has.  These new homes, in time, will help add to the operating budget of the town.”

Bobola sees the benefits far beyond the act of new home construction.  When the real estate market booms, a ripple effect throughout the community can be seen.

“You have all these engineers and construction companies coming into town.  They frequent the local businesses and it’s a huge benefit to them.  You have more people buying gas in town, they goto our restaurants.  A lot of them will rent bedrooms or apartments around town for their laborers.  It all goes back to the town,” said Bobola. 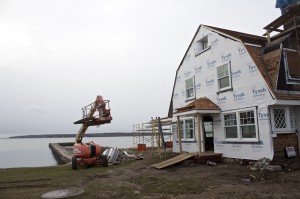