You are here: Home » Features » All About Birds in Mattapoisett

Mike McCarthy first picked up a carving tool at a Boy Scout meeting when he was 12 years old. Next year, he’ll celebrate 20 years of self-employment as a woodcarver, specializing in shore birds.

“I started whittling neckerchief slides and walking sticks,” McCarthy said. “The ‘aha’ moment happened when my family and I were camping in Maine and I went looking for a book to read. At a used book store, I picked up a book on antique shore bird decoys and saw the work done by Elmer Crowel and knew right away that that was what I wanted to do.”

A. Elmer Crowel, from East Harwich, is considered the master duck decoy carver in the woodworking field. He lived from 1862 to 1952. His work can be viewed locally at Plimoth Plantation. In 2011, one of his preening pintail drakes sold at auction for $1.13 million.

McCarthy travels most of the year on weekends selling his creations at craft fairs and festivals including Harbor Days in Mattapoisett and Arts in the Park in Marion. He brings his tools and sets up a workbench, which draws people over to ask questions about his work and birds.

“I’m usually the only person in a booth that is working while at the event,” he said.

After talking to hundreds of people each weekend, he retreats back to his workshop and enjoys a peaceful and quiet week. His tidy workshop has a woodstove and a small bed for his dog, who sits or sleeps while he carves. Shelves and shelves of birds and a pile of driftwood line one side of the shop.

In mid-December, McCarthy stops traveling and begins a new year by thinking about new creations, focusing on habitat, or where the bird is standing, sleeping, eating or hunting.

A look around his workshop shows beautiful finished birds that look lifelike and other birds in various stages of work. A pretty puffin stands out among the muted colors of the birds. One of his herons has a lifelike fish in its beak. Others stand on driftwood in various positions. In another piece, one bird sleeps while the other keeps watch.

McCarthy sticks to craft shows that are close to the shoreline.

“You get 15 or 20 miles from the coast and people ask for cardinals and bluebirds,” he said. “If you don’t live near the water, you probably wouldn’t recognize a shore bird.”

McCarthy plans to set up shop in Wellfleet during the oyster festival the third weekend in October. You can see his work there or by appointment at his shop in Mattapoisett. 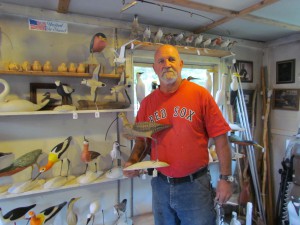 One Response to “All About Birds in Mattapoisett”