You are here: Home » Features » A Swan’s Best Friend

Phyllis Washburn, Marion resident and author, told the heartwarming, tender story of how she and her husband Ralph met a swan and began a journey they could not have anticipated. Their relationship with Sam the Swan has been captured forever in her book Good Morning Sam.

Washburn spoke on August 29 after the Marion Council on Aging luncheon as part of an ongoing series of after-lunch lectures sponsored by the COA at the Marion Music Hall.

The Washburns started out simply enjoying nature and observing the animals, quietly, gently along the salt marshes, coves and inlets on the shore of Sippican Harbor. Over time, Ralph and Phyllis Washburn would become the best friend a swan could ever have.

She said that in 1985, “Ralph was doing some work in the harbor and was told about the swan.” The swan had already been given the name Sam by the time Ralph met him and fed him crackers. Ralph said to his wife excitedly, “You’ve got to see this swan!”

The Washburns hadn’t planned to visit daily, but they were enchanted by the giant bird’s splendor and willingness to allow their advances. They began to bring him bread, slowly earning the mute swan’s trust. “We fed him bread occasionally, then twice a day, then got him to go up on the beach,” she said in a voice as soft as a whisper. Washburn said that she even baked cornbread for Sam. “It was Ralph’s favorite breakfast, too,” she added with humor.

During that first winter of what would become a 14-year adventure, “We coaxed him out of the water and fed him,” Washburn said. As time went by, the Washburns would find themselves feeding Sam twice a day everyday. “He’d always come back at mealtime,” she chuckled, and then added, “The fourteen years we spent with Sam were pure joy, on our part, and on his part, too, I think.”

Sam, they would learn, had a damaged wing and could not fly; therefore, since he was stuck in Sippican Harbor, Sam made his living from nature’s bounty and now through the generosity of two devoted humans.

“One winter he disappeared,” Washburn told the audience. “We called the police and asked them to keep an eye out because it was hunting season.” As fate would have it, the police were notified of a swan in the Weweantic River that appeared injured.

The intrepid couple sought him out calling to him. Lo and behold, the swan responded. For two weeks, the Washburns returned daily to the river feeding Sam and monitoring his condition. They were anxious to find a way to get him back into Sippican Harbor, as they knew the Weweantic often froze over in the winter. They were worried Sam would be frozen, too.

One day, when they went to the river to feed Sam, he was gone. “He had managed to get back to Marion,” Washburn sighed with relief as if it had happened yesterday.

Washburn describes their experience of befriending Sam as a “blessing,” one that they experienced because of their willingness to “meet nature where it is…”

Ralph, a photographer, took pictures of Sam and other swans that came in and out of his long life. Phyllis simply started out writing expanded captions for those pictures. She also kept a journal documenting their experiences with Sam. After a while, and with some encouragement, Phyllis began studying and writing at a Cape Cod writers group in Hyannis. After four years, she was prepared to write the story of Sam.

During her discussion, Washburn took her audience through the trials of protecting Sam during Hurricane Bob, providing shelter for him in their backyard when old age threatened to drown him, and welcoming the occasional female partner when Sam was fortunate enough to catch one’s eye for a season.

“[Sam’s] life ended in our backyard,” Washburn said wistfully. As difficult as that must have been, the Washburns always felt “it was a fantastic adventure.” With Sam gone, the female who had also come to live on their property as his partner was now alone. This female they had named Little One. After Sam’s passing, Little One “called and called for him.” To ease the lady’s sorrow, the Washburns got her a black duck for company. “The duck bossed her around,” Washburn remembered with a smile. Little One stayed with the Washburns for nine years.

Washburn said that she and Ralph “still look for swans in the harbor every spring.” She lamented, however, that due to the harbor being congested with boats, swans are now less likely to nest along the shores.

As her discussion drew to a close, Washburn shared that after Sam died, “I heard a swan and looked up but no swan was there. I think that was Sam telling us he was in God’s kingdom now and flying again.”

You can visit Washburn’s website at www.ourswans.com and watch their YouTube video titled “Mute Swans and Humans,” and order a copy of the book. 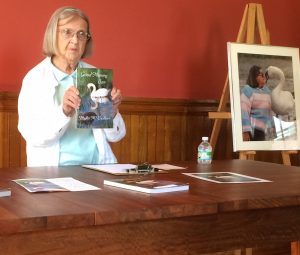