You are here: Home » Features » A Stitch in Time

Mattapoisett’s deep and rich history as it went from being a seaside agrarian and fishing culture to a pivotal shipbuilding center is fairly well documented. Museums along the eastern seaboard, and certainly those more closely situated to this tiny notch in Buzzards Bay, are full of reference materials hailing Mattapoisett as a major global economic player between the 1700s and 1800s.

But one man whose heritage is also deeply woven into the very fabric of this community’s history believes people – especially the women who lived in Mattapoisett – were industriously employed in the mid-to-late 1800s as garment workers. David Anderson is exploring that possibility.

Anderson, retired attorney and native son, spent the majority of his adult life in the District of Columbia and New Mexico. With family still living in the local area and frequent visits home, he stayed connected to Mattapoisett and the Pine Island Road property that has been in the family for more than a century.

Now with time to devote to the study and organization of his family’s historical documents, he believes he has hit on a new economic connection, a thread if you will, between Mattapoisett and events that helped to shape our nation.

“Before the Civil War,” Anderson said, “there weren’t standard clothing sizes.” He explained that clothing was made at home primarily by women who beavered away by candlelight to keep their family members warm and covered. “But during the Civil War, Union soldiers needed uniforms,” and through his research he has learned that sizing had to become standardized in order to keep up with military demand.

Yet, how did Anderson come to these conclusions? His great-great-grandmother’s journal helps to tell the story.

Among the many family papers and documents of which Anderson has come into possession, making him the family historian, were the personal journals of Sarah Dexter Ransom and her husband Nathaniel Cushing Ransom, Anderson’s ancestors on his mother’s side.

“My mother gave several of the journals to the Whaling Museum in New Bedford,” Anderson said. Most notably was Ransom’s journal kept while he was crewing on the whaling bark John Wells during its ill-fated arctic journey. “All the logs books were destroyed when the ship was lost in the ice,” he says, “so my great-great-grandfather’s personal journal from that trip was important.”

As he tenderly handles the one journal that remains in the family collection – a small delicate text connecting the here and now with the past – Anderson tells his great-great-grandparents’ story.

Sarah and Nathaniel lived nearby one another. They were eventually married. The journal speaks, “This afternoon was quite pleasant on the whole. Sarah and I went to Sippican and were married by Reverend Cobb, from there we came home again. My dear wife and I spent a part of the evening at father’s…”

Along with a day-by-day chronology of weather conditions and the social aspects of life long before human communications were usurped by radio, television, and all manner of electronic devices, Sarah writes how she was employed as a seamstress doing piece-work.

Anderson is drafting Sarah’s story by gleaning information from her journal. From his draft we find, “For a deposit of as little as $50.00, jobbers could obtain pre-cut cloth and patterns for a batch of coats from the textile mills in New Bedford and Fall River…” He says that women like Sarah were given bundles to work on and the jobber in turn wholesaled the finished pieces. Anderson speculates that because Mattapoisett was connected to New Bedford via a railroad, the movement of goods could easily be accomplished.

Sarah documents that she worked on men’s coats turning out as many as ten units a day. Women employed by a jobber would receive bundles of cloth and would perform one or two aspects of stitching on the coat. Thus, garments were turned out via a cottage industry of women throughout the area who were paid by the unit.

Sarah’s journal speaks primarily to the everyday comings and goings, and one has to carefully read the fading lines of text to pull out significant bits of history. Yet, the very gentle ebb and flow of everyday living, one’s ancestors calling from long ago, is significant to Anderson.

“To have mementos of the family means a lot. It cements your roots,” he shared. Drifting along on that thought, he added, “Every time I pull into the driveway at Pine Island, I think ‘Nathaniel walked here.’”

While Sarah and Nathaniel may have been well known around town in their day, Anderson’s parents were most likely very well known.

Anderson hopes to complete his research on the local garment industry while pulling together as much family history as possible, not only for his own family, but those who study local history, especially the economics of those times. And to that end, he is slowly unraveling the threads that Sarah sewed. 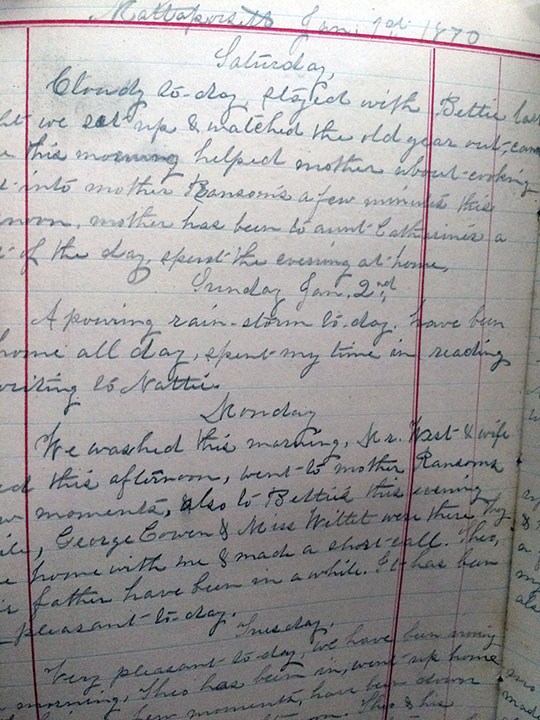 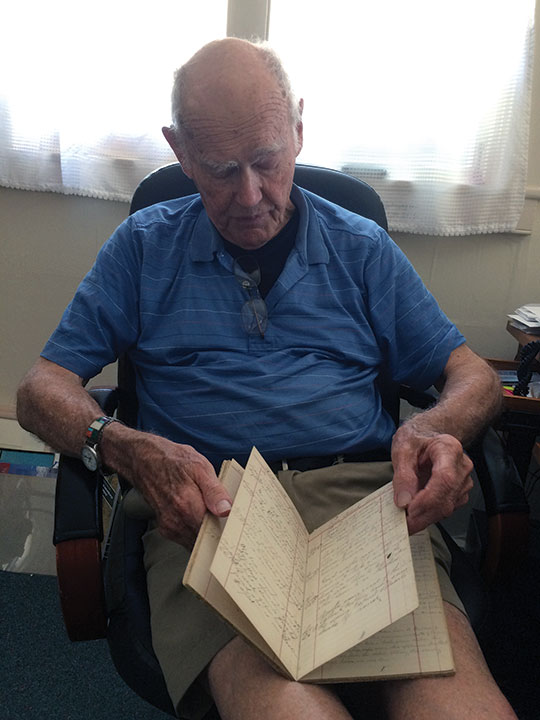