You are here: Home » Features » A Night On The Water

He loved the water. He inspired us all to be kind, happy, better people.  He loved all kinds of children.  He brings creativity to everything.  He always, always, always smiles.

These are the words of family, friends, and students describing Charles Pickles of Marion, a former junior sailing instructor at the Beverly Yacht Club and avid cook, who died in a skateboarding accident in 2005.  He was not yet 30 years old.

For the last few years, his parents, Diane and Ray, have organized a boat cruise benefit, to honor the memory of their late son.

“For me, this benefits his memory in a way he would have wanted.  It’s all about people coming together, having fun, and sharing time and stories about him together,” his mother, Diane, said.  “Charles would make everything fun.”

The event was attended by almost 100 people, which in itself stood as a testament to the power the young Pickles had on the people who meant most to him, from the closest members of his family to his favorite sailing students.

Everybody on the boat seemed to have a story to tell about Charles.  Many of those stories were compiled by his mother into a couple hardcover memory books she brought for people to read.

The result was a tome of joy, thanks, remembrance, and sorrow, stuffed with photos, letters, poems, and drawings, each evoking special and personal memories of Charles.  As the cruise continued, dozens of people sat and pored through the volumes, some together, some alone, and each person seemed to strengthen their connection to Charles and his memory.

There’s the story about three year-old Charles and his penchant for sticking chewing gum in his own hair, and his resulting fussiness over the peanut butter and ice cube process employed by his mother to remove it.  Then there was the three-week family trip to Calgary, Canada in August of 2000, where they hiked the Rockies, visited Olympic Park, and picnicked at Lake Minnewanka.

Don’t forget about the time he took his friend, Ben, out sailing, when Ben was contagious with chicken pox and couldn’t be in public.  Or the time he arranged for a special table at his restaurant for his cousin Stephanie and her beau Ken on Valentine’s Day, where they could watch him in the open kitchen preparing their meals.  These are all small but immensely important pieces to the mosaic that was a life dedicated to happiness and fearlessness.

“He had as much fun as he possibly could at all times,” said Margaret Evans of Marion, who was a lifelong friend of Charles.  “He was a gentleman.  He had this amazing aura.  Whenever

“The essence of it all was to have a great time,” said Paul Fathallah of Marion, who knew Charles for over 10 years.  He told the story of how he and Charles were on the water when Fathallah, who has a strong aversion to jellyfish, saw a big one floating in the water near the boat.  “He was looking for it and looking for it and when he finally saw it, he tried to jump in

“He was so daring,” said Sarah Gaunt, who met Charles when they attended the International Institute of Culinary Arts in Fall River. They were partnered up for many projects together during their two years of study.  “The first day I met Charles, he greeted me at the door, and even held it open for me and said, ‘My name is Charles Pickles, but my friends call me Pickles, so you can call me Pickles, too,” Gaunt said.

The proceeds of the event go to benefit the junior sailing program at the Beverly Yacht Club, as well as the Community Boating program, which provides opportunities for students from New Bedford to learn how to sail. 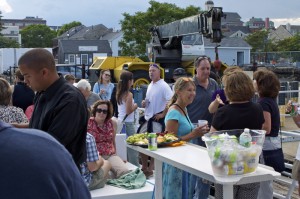