You are here: Home » Features » A New Year for Environmental Recognition

As illustrated in my drawing, Native Americans, as a rule, recognized every living thing on Earth as sacred – even the smallest blade of grass.

Consequently, they harvested from nature no more than needed for their own immediate use, and this conservation concept of ‘live and let live’ sets a fine example for us to this very day.

My own initiation to this mindset of environmental awareness was as a 13-year-old boy during the second World War, when my father with the 8th Air Force in England was reported missing in action over in Germany. I was adopted in true Indian fashion by a Narragansett named Elwood Young who had been given a job there to walk in the footsteps of his ancestors’ hunting and fishing ground.

The adoption ceremony began with cutting both our arms and tying them together while a drum beat and chant sanctified a column of camp fire smoke lifting into the sky to return to the solar creator and father of life on Mother Earth.

Our nearest neighbor across the fields in Southern Rhode Island was Senator John Chaffee – the Chaffee who pioneered conservation legislation including the Clean Water Act of 1972, an environmental landmark equal in significance to the historical Migratory Bird Act of 1916 and as nationally whistle-blowing as Rachel Carson’s Silent Spring, banning the use of D.D.T. so destructive to the nesting of birds.

Mike Huguenin, president of the Mattapoisett Land Trust, told me he is strongly among those believing that nature has an inert capacity to right itself and overcome man’s destruction, providing left to its own recovery through the preservation of open land.

This dovetails with the Indian premise that the land that God gave does not belong to us, but instead to the next generation of our children and grandchildren.

The air we breathe, water we drink, food we eat, and the planetary seasons are all encompassed under the sacred heritage we leave them.

With this message of native origin and image, let me wish you the reader a very Happy New Year! May the blessings of our heritage bring you and yours great joy of a renewed spirit upon Earth. 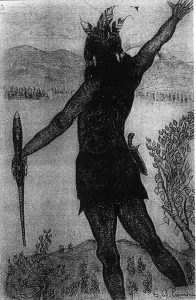