You are here: Home » Features » A New Three-Time Winner for Boat Race

The Rochester Memorial Day Boat Race started as a 4-H project back in 1934 headed by Jim Hartley, when participants fashioned “canoes” from pine boards and decided it would be a fun idea to start a new boat race tradition.

A few things have changed since then, including the addition of some ingenious hand-crafted and painted boats, and even a pirate thrown in for fun. But the race itself and the sentiment of tradition behind it remain unchanged – the Rochester Memorial Day Boat Race continues as a family ritual for many, and oftentimes a right of passage for the next generation of Rochester families, teaching a lesson or two about endurance, competition, teamwork, and the ‘keep paddling’ outlook on life.

This year brings a new three-time champion team to the history of the boat race, with Dan Lawrence and Bill Watling III taking first place in the Open Division for three consecutive years. They received their Jim Hartley trophy the night of the race during an awards ceremony in the Rochester Memorial School gymnasium. The trophy is in Hartley’s memory, the founder of the boat race. The last recipients of the Jim Hartley trophy were Sean Shaw and C.J. Hedges IV, winning the three-year trophy four times for 12 consecutive wins.

Trophies are given to each contestant of the teams that come in first, second, and third place in each division.

There is also the distinct honor of the Old Man River Award, given to the oldest participant in the boat race who finishes the race. The award can only be received once, even though they may be the oldest person in the race in subsequent years.

This year’s Old Man River award went to James Ziobro, age 60. The first Old Man River trophy was awarded back in 1979 in memory of Peter Balzarini, the official starter who fired the starting gun for many years.

Some fun facts about the 2015 race: There were 66 teams competing in this year’s race. The shortest racer was 4 feet tall, the tallest 6’6’’. The youngest was six years old, and the oldest 61, according to Race Coordinator Art Benner. The lightest participant weighed 65 pounds, the heaviest 255 pounds.

Most of the racers were from Rochester with 71 Rochester residents, and Mattapoisett came in second with 26. The participants who live farthest away this year are from Ecuador. There were also some contestants from Pennsylvania, New Hampshire, and Connecticut.

The course, which has been known to sink or break a few boats in half, could have been worse, according to Benner. The water levels rose slightly from the previous week after a bit of rain.

“It was kind of a struggle (this year),” said Benner. “Not as much water, that’s ideal, but it was better than last week.”

This year‘s race was dedicated to Charles “Chuck” Gonneville in honor of the many years he committed to the running and organizing of the boat race. In the gymnasium at RMS, a large American flag, which will remain, hung on the wall in Gonneville’s honor. Gonneville was also a custodian at the school, as well as a firefighter. During the awards ceremony, an empty chair draped with his firefighter coat, his helmet, and a mop was on display in the background as a symbol of the importance his presence meant to many.

“He was always just thinking about the boat race,” said Benner. Benner said Gonneville would even schedule his vacations and schedule around the sign-ups for the race. ”He was always sitting at the door of the cafeteria selling tickets to the ham and bean supper.” Benner reminisced for a while about all the fun he used to have with Gonneville, and acknowledged his significant role in the race every year. 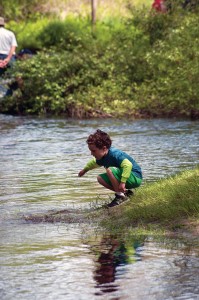 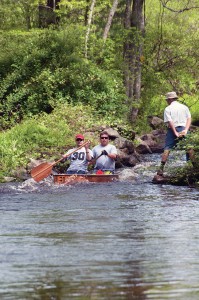 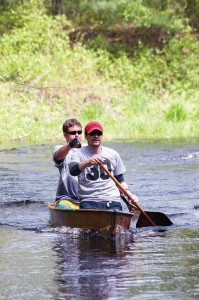 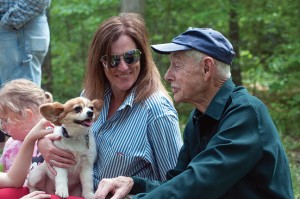 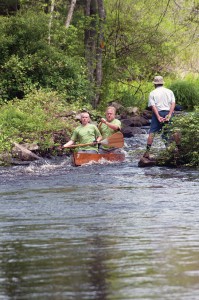