As of the start of the event on Saturday, swimmers had raised nearly $100,000 to support the nonprofit Coalition’s work to protect clean water, conserve land and educate youth and adults in communities across the Buzzards Bay region, from Westport to Woods Hole. Members of the public who wish to support clean water can donate to the Swim until July 15 at www.savebuzzardsbay.org/swim.

Calm, clear waters and bright sunshinegreeted swimmers as they gathered at The Edge Seafood & Lounge (formerly Davy’s Locker) beach in New Bedford. The first swimmers started at 7:15 a.m., and by 8:45 a.m. the final swimmer had covered the 1.2 mile course and arrived at the finish line at Fort Phoenix Beach State Reservation in Fairhaven.

Measured at 72 degrees, water conditions “were perfect,” according to Morgan McCarthy of East Orleans, who finished as the fastest female swimmer for the second year in a row with a time of 21:46. McCarthy, along with eight other swimmers, received the elite “Six-Mile Award” for completing her fifth Buzzards Bay Swim — the equivalent of swimming the entire six-mile width of Buzzards Bay.

The event drew swimmers from nearly 100 communities including participants from as far as away as Australia, Florida and South Dakota. Swimmers ranged in age from 12 to 74.

“This event is a great statement of the importance of a clean, healthy Buzzards Bay,” said Coalition President Mark Rasmussen. “I’m thrilled that so many people are coming to New Bedford Harbor to celebrate our local waters this weekend.”

Four swimmers this year – Anthony Garro of Dartmouth, Bill Muldoon of Mattapoisett, Matt Shenker of Pocasset and Dan Vasconcellos of Pembroke – have been working toward an exciting challenge: If they each raise $5,000, longtime swimmer Larry Fish of West Falmouth will donate an additional $10,000. As of the morning of the Swim, Vasconcellos and Shenker had raised $5,700 and $5,640 respectively, the top two individual fundraisers.

In addition to the top individual fundraisers, “Mimi’s Swimmers” (Bryan, Laura and Sarah Robertson of South Dartmouth) were the top fundraising team with a total of $2,025.

After the Swim, participants, volunteers and fans celebrated at a finish line beach party, complete with food and drinks, massage therapists, live music from El-Caribe and a live radio broadcast with Michael Rock of FUN 107. The event concluded with an awards ceremony.

For the second year in a row, the fastest swimmer was 17-year-old Alex Gallant of Lakeville, who covered the course in 21:12. Right behind him was 18-year-old Nathan Garner of Nashua, N.H., with a time of 21:27 and first-time Buzzards Bay Swim participant Frank Wuest of Boston with a time of 21:32. The Wheeler Watershed Challenge Cup for the fastest team went to the Team Westport(Elizabeth Geiger, William Krause and David Lippin)with an average team time of 27:17.

The Quicks Awards for the fastest boys and girls high school teams both went to Apponequet High School in Lakeville. The Apponequet boys team (Josh Beck, Alex Gallant and Nicholas McKenna, all 17) had a combined total time of 23:29 andthe Apponequet Lady Lakers (Kaitlyn Barrack, 17, Kaye D’Andrea, 17 and Brienna Harrison, 16) had a combined total time of 26:50. The two teams will each bring a $1,000 prize back to their school.

For a full list of results and photos, visit http://www.savebuzzardsbay.org/2014buzzardsbayswim.

The Buzzards Bay Swim is one of two signature outdoor events hosted by the Coalition. The other is the Buzzards Bay Watershed Ride, a one-day bicycle ride covering 76 miles from Westport to Woods Hole, with a shorter 35-mile route beginning in Rochester. The eighth annual Watershed Ride will take place Sunday, October 5. Details and registration are available at www.savebuzzardsbay.org/watershedride. 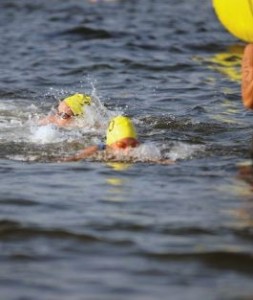