You are here: Home » Events » Birds, Beaches and Bogs, II

In 2009, the Marion Art Center hosted a gallery exhibition entitled “Birds, Beaches & Bogs”.   The show featured local artists and was such a success, that doing a second show was a foregone conclusion.  “Birds Beaches & Bogs II” will open on Friday, July 19th with an opening reception from 6pm to 8pm.  Members and guests are invited to come and meet the artists, and enjoy good food and libations.

Sarah Brown of Marion has been exhibiting at the Marion Art Center since 1968.  She studied art at De Pauw University and then went to art and music school in France at Fontainebleau.  She is well known for her vibrant watercolors, and more recently she has been painting with pastels.

Heide Hallemeier was educated at the Art Academies in Vienna Austria and Germany as a graphic designer. She is a signature artist member and past board member of the Rhode Island Watercolor Society and a board member of the Westport Art Group. She has exhibited throughout New England and Pennsylvania and was accepted into many National Exhibitions and has won numerous prizes in juried exhibitions. She taught watercolor painting for various organizations, juries and judges shows and is part of the South Coast Open Studio Tour.

Gail Marie Nauen is an award winning artist residing in Carver, Massachusetts.  She is noted for her renditions of the seasonal changes in the local cranberry bogs. She was awarded a Massachusetts Cultural Council grant to portray the “Four Seasons of the Bog” for the Carver Public Library.  Gail Marie Nauen’s art is in many collections, including Ocean Spray Cranberries, Fidelity Investments, and Cranberry Hospice.  Ms. Nauen holds a B. F. A. from UMASS/Dartmouth and attended Parsons School of Design in New York. She has shown in numerous shows throughout New England and won awards at North River Arts Festival, Plymouth Art Guild, Rhode Island Watercolor Society and  South Shore Arts Center.  Of her work she says, “Living in Carver, Massachusetts the local cranberry farms supply a never ending array of seasonal images to draw from. These paintings reflect those explorations.  Invariably, something will catch my eye and I’ll just “have to paint it”. If time or weather conditions do not allow, I will often sketch the scene from memory back in the studio. Whether it be in the “open spaces” these cranberry bogs provide or through the emotional reaction these experiences evoke, I feel fortunate to find a lifetime of artistic pursuits so close by.

Molly Watson Hawley works in a number of media to explore how the surface images of the visible world represent a deeper and ultimate reality.  She began her undergraduate studies at Middlebury College, then went on to study graphic art at the Boston Museum School and The Cleveland Institute of Art where she specialized in printmaking. She has since worked extensively in other media, including pastel and oil painting, and more recently has produced a number of multi-media works combining fabric, photography, painting and drawing. For years she has painted commissioned portraits for private clients and institutions. Her work hangs in the permanent collections of Baldwin Wallace University, Cleveland’s University School and in a number of private collections. Her work has been widely exhibited in juried shows, including the Butler Gallery of Youngstown University and The Cleveland Museum’s annual May Show.  Hawley studied for a number of years with the plein air masters Cedric and Joanette Egeli at the Cape Cod School of Art in Provincetown. Her portraiture has been informed by her work with portrait masters Jose Cintron and Burt Silverman. In addition to her continuing portrait commissions, she is actively at work on an extended series of Cape Cod and Vermont landscapes.  Her home and studio are in Ripton, Vermont, where she lives with her husband, the writer Richard Hawley.

Michael Ouellette of New Bedford, will be exhibiting his large oil and acrylic paintings of birds.  Michael is known for his exquisitely detailed paintings of wildlife and landscapes. 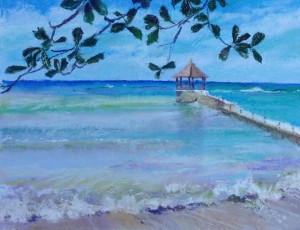